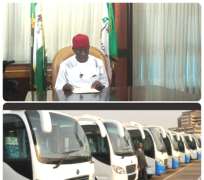 The Delta State Government has explained its decision to sell part of its equity stake in Delta Transport Services Limited, saying that the company failed to be commercially viable.

Because of its nonviable nature, the state government was injecting capital into the company from time to time as a way of support because of its unique position as the only government-owned and branded transport company.

A statement signed by the Media Assistant to the State Commissioner for Information, Mr. Sam Ijeh, revealed that the state government in the past invested heavily in the company through the provision of 160 brand new Toyota Hiace Buses, 76 brand new Toyota Corolla Cars and other incentives in cash or kind.

Furthermore, from 2012 to April 2015, the state government released monthly palliatives to the company to mitigate the effects of fuel-price increase which occurred at that time.

According to the statement, unlike others who benefitted from the allocation of the government buses, Delta Line never remitted any revenue to the state government, instead the company was riddled with debts made up of salaries and wages of staff, allowances and claims of staff, contractors, and suppliers obligations.

The Media Assistant noted that the Workers Union interference in the affairs of management did not help matters.

In a bid to sanitize the company, government sacked the General Manager and suspended some other principal officers and directed the Directorate of Transport to supervise and oversee the activities of the company, with an inherited six-month salary debt.

He stated that to stem the tide of further deterioration, the government opted for sale of part of its equity stake and this was duly advertised in national dailies for expression of interest and respondents submitted their bids plus necessary documents in line with due process following which the successful bidder was considered.

The statement disclosed that the Nigeria Labour Congress (NLC) did not indicate interest at the time of advertisement and neither did it provide details of how it would source funds for the purchase of the shares to be sold, noting that the entire process followed due process and a memo was forwarded to the State Executive Council accordingly.