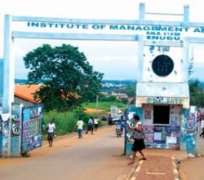 With regards to the essence of student unionism to an institution, students of the Institute of Management and Technology, IMT, Enugu, Friday elected new executive members of the Student Union Government of the institution. The election which was held at the various departments of the aspirants was full of suspense, excitements, reactions and fear of defeat as some candidates were already crying foul before the result was announced by the Head of Departments, Student Affairs. The election witnessed the emergence of Ani Monday Diamond as the newly elected president of the union.

The result of the election was announced at the DSA's office following an open collation witnessed by the students. Diamond emerged president of the union after beating his closest rivals Onah Joseph and Chukwu Obumneme.

For the rest of the positions, Egwuonwu Solomon took charge as the Minister of Information, Okenna Gerrard took the mantle as Minister of Establishment, Ugwuode Chinedu as Minister of Social, Anyaduegwu Amara emerged Deputy Finance Minister, while Eze Ferdinand torpedoed his rivals to emerge Minister of Welfare.

Students and electoral officers attested to the free, fair and transparent election which saw the election of the new Student Union Government leaders. Ugwueze Chidera, an ND Two student of Public Adminstration said while speaking to Campus Sun correspondents that there were no issues regarding the conduct of the election, adding that the election was one of the most transparent in recent time. Chidera said that previous elections have been a thug of war with so much to worry about. He commended the efforts of the electoral college for their immense work in keeping the peace of the institution.

There were few cases of oppositions and objections by dissatisfied students who said the administration was duly depriving them of their mandate. Some candidates complained that their names were unduly removed from the ballot papers sent to some departments and took their complaints to the head who quickly responded positively to it.

At other quarters, electoral materials arrived hours after the scheduled time for the election, causing some students to leave without voting while others said they lost the vibe to vote; leaving loads of questions as to the credibility of the election.

On why some departments could not start with others, an electoral officer who refused to identify himself as explained that the electoral body was adjusting to a new system which made some departments to be behind schedule. He said he was committed to ensuring that orders from above were carried out.

Now that the election has come to an end, students said they look forward to the positives in future.

"As you have noticed, there was low turnout of voters. That is because nobody cares. Students are no longer interested in who rules them. They (candidates) make fake promises to students year in, year out but after getting into office, you see them fighting over who gets what. It hurts. Instead of working for the students, they are working for their pockets. Let them prove us wrong before we can believe them, " Mbam Sunday lamented.

The new leaders have promised to bring the much needed reforms and to work for the good of the students they are representing and to the uplift of the institution.