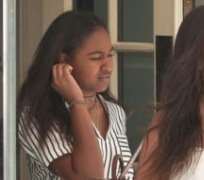 Video footage obtained of Malia Obama, daughter of former President Barack Obama and former first lady Michelle Obama, published by TMZ Tuesday showed the teen being carted out of Lollapalooza festival in Chicago, where she spent the weekend enjoying live acts that included The Killers, among others.

In the new video of the former first daughter , Malia Obama could be seen riding in the passenger side of a golf cart with two additional passengers riding in the back. The video, which did not have sound, showed the 19-year-old with her phone close to her ear and appearing what TMZ described as “kinda dazed.” Her head was tipped forward and the phone was held a few inches from her head.

“It’s unclear how much time elapsed between this video and the other footage we got of her rocking out to The Killers that night — but she’s wearing the same clothes,” TMZ reported. “Barack’s oldest daughter headbanged and writhed on the ground with friends — basically, doing what 19-year-olds at Lollapalooza typically do.”

As mentioned by the gossip website, the soon-to-be Harvard pupil was previously recorded enjoying a set by The Killers with a friend during the Chicago festival. Malia Obama has become something of a pop culture darling for her famous music festival dance moves, some of which were caught on video during last year's Lollapalooza as well.

Aside from her golf cart and stageside antics, the famous teen also reportedly lost her iPhone at the music festival. Malia Obama was later accompanied to an Apple Store in Chicago by Secret Service agents, according to Page Six Monday.

“Malia came into the Apple Store to get her iPhone replaced, but things didn't go exactly [as planned],” a witness told Page Six of the event. “The Apple Store couldn't immediately help her because she didn't have the Apple ID or the password for the missing phone, since the White House set it up.”