Death and the governor’s mother 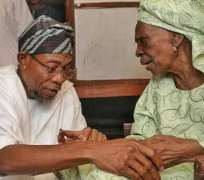 - George Bernard Shaw
Rauf Aregbesola must be an extremely sad man, as we speak. This is because, in a spate of two weeks, the governor of the State of Osun has lost two particularly dear friends to the cold fangs of death. First to answer the final call was Olu Abiola, a foremost industrialist, socialite and philanthropist who was not only "an invaluable asset in the business world", but also "gave his all to the cause of" Aregbesola's administration. Abiola gave up the ghost on July 16, 2017 and the world mourned the passing of a patriot! Two weeks after, precisely, on Tuesday, August 1, 2017, the matriarch of the Aregbesola family in Ilesa, and the governor’s mother, Alhaja Saratu Aregbesola, also exited this sad, sick and insane world of war and the vagaries of its sinfulness. Rauf lost her beloved mother and a chapter in the history of his events-filled life came to a close.

Though grieving is a natural reaction to a loss, the solace in these two sad events is that both grew relatively old before accessing the hereafter. Like Abiola, Iya Olobi, as she was fondly called, will be sorely missed by the governor. Just recently, the governor informed a stunned audience that he has three homes in Osun State. First is Government House at Oke Fia in Osogbo, his official residence. Second is her mother's, in Ilaje, Ilesa. And third is Abiola's house in Oke Omiru, also in Ilesa. Now, two of these 'homes' are bereaved and one can imagine thegravity of the governor's grief.

As we all know, being a governor's mother, especially, in this part of the world carries along with it a lot of responsibilities. The 'challenge’ of that office is so threateningly enormous that, once upon a time in Nigeria, a 'Mother Excellency' almost seized control of the powers constitutionally vested in her son as governor of a state. But Aregbesola was with a difference! I doubt if she ever interfered in governance issues in Osun. And it's not recorded anywhere that she ever used her influence to curry favour anywhere. The present state of the road on which her house in Ilesa is situated bears eloquent testimony to this.

But, what is life that its “meter just keeps a-ticking whether you are getting somewhere or just standing still”? On the other hand, why is death described as “a gift to have more life” and why did Walker Scott see it as “the final awakening”? Of course, that's why I seriously disagree with Will Rogers that being a hero is more of knowing when to die because “prolonged death has ruined more men than it ever made.” For instance, were Rauf to have a choice between losing his mother now, when the possibility of the state shutting down to accord her a befitting burial is high, and letting her live longer till say, when "the phones no longer ring", I'm sure he’d have opted for the latter. That goes to explain the importance of parents in a man's life!

Iya Olobi’s vision of life was remarkable. She trained her children, sometimes, through the seeming endless valleys of travails, to become responsible citizens in the society. She neither wavered nor faltered in nurturing them, sometimes through the physical thistles and the psychological toughness of a journey of life which, in many instances, attempted to dilute her faith. Despite the winding and the wearisome nature of the journey, she did all that's worth doing to give her children's future a meaning.

“Life”, in Marion Howard’s words, “is like a blanket - too short.”This"mutual hostility” is also said to be about wars; you win some, you lose some. Sadly, but with total submission to the will of Allah, Iya Olobi has lost the final struggle of life to death! So, rather than grieve over what’s inevitable, the governor and his siblings should reflect and, with hearts full of praise, appreciate God for having such a wonderful mother who has in no small way added value to their lives. More importantly, the governor should be thankful to the Allah for letting his mother see him through success, notably,asan engineer,a ‘chattered politician”, and“an astute administrator with a vision, one blessed with the ability to picture into the fortunes, hopes and desires of a future which best is yet to come for dear state.”

Like mother, like son! Japheth Omojuwa describes him as a "seemingly ordinary man with the proven extraordinary abilities" while Joe Igbokwe sees him as "a repository of trust and confidence among his followers."Aregbesola has helped a great deal in the transformation of Osun from the shameless sensualities of the Ancient Times and the ruthless ferocity of the Dark Ages into “a developed, cleaner, safer and more beautiful state” that, in another 30 years, Osun will no doubt be a reference point to other states in terms of infrastructure development.His promise of a brighter future has been unsurpassable in the history of the state. Little wonder Aregbesola is one of the most outstanding and credible personalities the Nigerian nation has ever known.

In 1890, Crowfoot on his deathbed famously referred to life as the “flash of a firefly in the night“; “the breath of a buffalo in the wintertime“; and “the little shadow which runs across the grass and loses itself in the sunset.” Without doubt, Iya Olobi’s life brings to memory All Progressives Party (APC), interestingly, a political party co-founded and nurtured into adulthood by his governor-son. Truth be told, APC is fractured in not less than 10 states. Wolves in sheep’s clothing and politicians with no fixed identity are threatening the survival of the party and it seems as if the Father Christmas of our immediate past has lost the essence of his gift. But I believe that this challenge is not insurmountable if only the leadership can learn some salient lessons from the life, travails and the triumph of Rauf’s mother. Herinspiring life and unwavering commitment to excellence have shown that living in questionable submission to the fatal fantasies of life is not always an option.

May Allah grant the soul of the faithful departed Al-Janat!