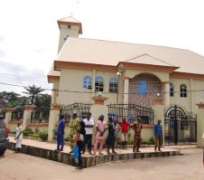 President Muhammadu Buhari and other Nigerian leaders have condemned the Ozubulu Church's attack in which 11 people were killed and 18 injured.

A gunman was reported by the police to have killed the worshippers early on Sunday at the St. Philip Catholic Church, Ozubulu, Ekwusigo Local Government Area.

Buhari described the incident as “an appalling crime against humanity and unspeakable sacrilege.”

The President expressed his grief in a statement issued by his Senior Special Assistant on Media and Publicity, Malam Garba Shehu, in Abuja on Sunday.

Buhari said that “there was no justification whatsoever to target Church worshippers and kill them in cold blood''.

He said this kind of atrocity “plumbs the depth of depravity and extreme cruelty of the kind that words cannot adequately express''.

According to the President, there is no religion that does not lay constant emphasis on the sanctity of life, and that “all Nigerians must rise up and speak with one voice against these remorseless evil men''.

He reassured all Nigerians of his administration's firm and uncompromising commitment to protect their lives and properties at all times.

The President of the Senate, Dr Bukola Saraki, also expressed sadness over the killings.

The Deputy President of the Senate, Ike Ekweremadu, also condemned the tragedy and called for the arrest and prosecution of those responsible.

Saraki, in a statement signed by his Special Adviser on Media and Publicity, Yusuph Olaniyonu, stated that the killing of worshippers was evil.

He called on security operatives to bring perpetrators of the crime to justice.

”Today, my heart goes out to Nigeria's Christian community, Gov. Willy Obiano, the people of Anambra and the families of the victims and the survivors of this terrible massacre.

”This brutal act of attacking innocent and unsuspecting worshippers represents the purest kind of evil.

”Our security forces must not stop until everyone involved in the orchestration and execution of today's massacre in St. Philip's Catholic Church is brought to book by the strong arm of justice.

”The Senate will continue to offer assistance in this endeavour because today, all of us as Nigerians have been attacked by this senseless act committed by evil people,” he said.

The People's Democratic Party (PDP) also condemned the attack and called it as barbaric and sacrilegious.

A statement issued by Mr Dayo Adeyeye, the National Publicity Secretary, National Caretaker Committee on Sunday in Abuja said the party was shocked to receive the news of the attack that led to the killing and injury of many worshipers.

“This invasion is indeed barbaric, sacrilegious and a serious indication that our society is fast degenerating into a state of anomie with total moral collapse and utter disregard for the sanctity of human life.

“We sympathize with the Governor of Anambra State, Chief Willie Obiano and the entire people of the State; and in particular, worshipers of St. Philips Catholic Church and families of the victims.

“It is also a wake-up call for the government to do more in the area of protection of lives and property.”

A witness told the News Agency of Nigeria (NAN) on Sunday that the gunmen went into the church during the 5:45 a.m. mass and identified a particular man and shot him.

He said that they later went on rampage and shot at the remaining over 100 worshippers.

Scores of people were killed in the church while other critically injured worshippers died on the way to the Nnamdi Azikiwe Teaching Hospital, Nnewi.

The motive of the attackers was not clear.
*Also read: http://www.nan.ng/news/updated-lone-wolf-kills-8-catholic-church-say-police/#.WYcJ15HSRec.facebook

The source, however, said the priest of the church was not wounded in the incident.

The Commissioner of Police in the state, Mr Garba Umar, confirmed the incident, adding that more details would be given after investigations.