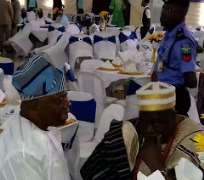 The deceased, popularly called Iya Olobi died on Monday and was buried on the same day.

Prominent politicians in the likes of the National Chairman of the all progressives Congress, Otunba Ahmed Tinubu, former Governor of the State, Olagunsoye Oyinlola, Bisi Akande, Governor of Oyo State, Abiola Ajimobi were all at the event to commiserate with Ogbeni Aregbesola.

Also present were traditional rulers in the State and its environs, Islamic clerics and pastors who all prayed God grant the deceased al jannat Firdouz.