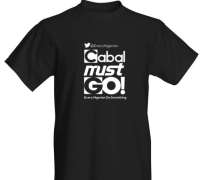 According to the just released report from the presidency, Buhari's Senior Special Assistant on Media and Publicity, Malam Garba Shehu said “despite the negative perception of politicians, there are still honorable men among such as Alhaji Garba Gadi.” and that "Buhari held Gadi in the highest esteem for standing by his principles, in spite of the risks in doing so.

"The President prayed to Allah to forgive the sins of the late Deputy Governor, and condoled his family, the government and people of Bauchi State and the APC."

Wow!
Without belittling the passing away of Alhaji Garba Gadi, may he be accepted by his Creator, the fact that Buhari could so intensely mourn one politician individual who passed at a good age of 70, but is yet to show any empathy for dozens of young Nigerians from a variety of non political fields who were martyred in the cause of risky self-sacrificial duties to the nation, makes me want to throw up.

Are the elite so into themselves and their fellow cabal that they have totally lost their humanity?

I looked at Garba Shehu's page. There was no mention of the deadly Boko Haram attack in any form whatsoever, talk less a message of condolence and promise of action. Likewise no mentions of the several other attacks across the state this last bloody June month.

On the 25th was the fake news "False News Alert" against AgP Osinbajo and PremiumTimes.

And before those were two condolences to the elite in succession.

On July 16 was, "President Buhari Commiserates With Sokoto State Government Over Passing Away Of Law Maker."

And there was another on July 13, "Buhari Sends "Heart-felt Condolences" To Chief Bisi Akande."

I was not surprised. Buhari carefully picks the elite and politicians to send his condolences to. It is all about support and this dirty game of cabal sponsored politics. The only goal of a politician in today's Nigeria is to remain in power. Everything he says or does and does not say or do is not based on humanity, compassion and the best interest of those who elected him into office, but based on political capital and subservience to the god of Nigeria's politics: the cabal.

This is why Nigerians have decided that enough is enough. This is why we are shouting from the rooftops, "for Nigeria to grow, the #CabalMustGo!" And they will go by the special grace of God.

I take this Press opportunity to mourn the victims of Boko Haram's recent attacks in Borno. May our Good Lord give their families the fortitude to bear the loss. You shall never be forgotten. We will make a list of all your names to be remembered and prayed for and your dependents will be adequately cared for when we take over from this seemingly endless PDP, newPDP(APC) nightmare in 2019 by God's grace.