ON THE NIGERIA’S AGONY 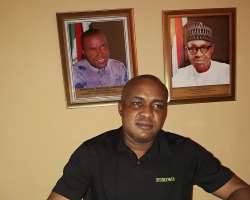 As devoted human rights campaigners, our official and private lines are usually inundated with calls from distressed members of the civil society.

These callers ranging from house wives confronting different facets of brutal domestic abuses and violence to single girls and men who have wandered the major streets of townships and cities searching for the elusive white collar jobs but can’t find any.

Sadly, the other frustrating type of calls come from gravely distressed Nigerians who can’t find three quality square meals daily for their survival.

For ten years we have administered our organization as a platform that uses the media to highlight the daily challenges of human rights' violations that occur daily affecting the ordinary citizens of Nigeria.

But I can confess that the last year and half (the second coming of Muhammadu Buhari on the driving seat of Nigeria) is obviously the most pathetic in terms of degeneration of the economic wellbeing of Nigerians.

Between December 31st 1983 to August 27th 1985 when the then Major General Muhammadu Buhari masterminded a military junta, Nigeria witnessed economic austerity measures that led to scarcity of essential commodities such as consumables to an extent that those items nearly became rationed just like what currently obtains in the chaotic Venezuela of our time.

Yours faithfully as a junior High School student remembers vividly joining the queues to be able to buy confectionery and house hold items whilst running errands for my Parents. That was the memories of the first coming of Muhammadu Buhari as Head of State.

His second coming since May 29th 2015 after an incumbent accepted defeat and handed him over the baton of political leadership, the national economy has gone from bad to worst precipitating one of the harshest meltdowns in the political annals of our nation State.

Although it is a fact that since 1999 when the extant Constitution came into being, the chapter two which emphasizes the fundamental objective principles of state policies have never been implemented but never has the national economy reached the threshold of imminent like it has been in the last one year.

This is because on the average, our office receives a dozen communications on daily basis which specifically have to do with complaints from Nigerians that their family members are hungry and indeed economically depressed.

Just before committing these thoughts into writing, a call from a family in Port Harcourt and basically the caller wanted to know how we can provide immediate bailout for the family to eat today. "Hello, is that the National Coordinator", the caller asked from the other end and then added thus: "please send us money to eat. we are starving in my family".

Immediately I ended the call with the person from Port Harcourt end, another call emanated from Jos, Plateau Sate from a family that wants us to assist them to pay a hospital bill for one of the members who needs a medical emergency.

At other times, we have had to struggle to find responses to give some of these callers who are in need of urgent financial bailouts for urgent medical emergencies.

The cases of persons not being able to meet the medical emergencies that confront them has to do with the non-existence of an effective national health insurance scheme unlike in most other climes whereby the right to medical insurance is what defines the essence of good governance.

In Nigeria, the NHIS is marred in internal administrative corruption and inefficiency. The Executive Secretary has just been suspended but he has denied all the allegations of wrongdoing.

This last point takes us to the issue of corruption and inefficiency in the system which has crippled the capacity of the health institutions to dispense health insurance.

Whereas over 165 Million of Nigerians are too poor and economically weak to pay for private medical treatments, the public health sector is almost in a stage of comatose.

In some Federating units, even the long-existed general hospitals have been sold out to private entrepreneurs at give-away prices and the populace are exposed to early deaths.

Imo state is one bad example when we talk about public health care because current governor has reportedly auctioned away most of the functional health facilities to his alleged cronies thereby letting the poor citizens to contend with looking for healthcare from the many quack health facilities that dots the State.

Most States are not better off than the Imo State's experience.

What makes all these experiences very terrifying state of agony is that President Muhammadu Buhari has been in and out of private hospitals in London, United Kingdom at public expense running into billions of Naira.

Only recently the cable News Network Pejoratively stated that Nigeria is the only country whereby the president has been to a foreign medical facility for over two months without returning to his nation.

Apart from, economic recession which is biting so severely since the current government came on board, the problem of unemployment has spiralled out of control even by official estimates. The National Board of Statistics recently issued a report showing how disturbing the unemployment issue has become. In a given month over a million employed persons are sacked because of the rapidly collapsing infrastructures in the country which have not created the enabling environment for the private sector to thrive abd engage more hands.

This parlous economic situation foisted on young Nigerians by lack of opportunities for either self-employment or public engagement means that Nigerian Youngsters who can’t bear the unbearable economic burden have embraced social crime such as (yahoo/Yahoo) or advanced fees fraud and other violent crime.

Human trafficking for sexual eenslavement in the developed European nations is one major challenge facing our young people. Nigerians are fleeing in their thousands not only because of economic misfortunes but due to widespread insecurity all around the Country.

This Nigeria’s dilemma or agony was graphically blamed on poor and corrupt leadership by most scholarly writers.

Professor Chinua Achebe of the blessed memory in one of his books stated rightly that corrupt leadership is Nigeria’s affliction.

Also, Tunde Adeniran, an academic who later joined politics and became Nigeria’s Ambassador to Germany found the presence of mind to articulate the sacred fact that Nigeria’s problem are basically caused by lack of good governance.

In his book “My Mission to Germany” Dr Adeniran wrote thus: "one dilemma then however was that Nigeria’s public policy values were evoking distortions as a result of the leadership ‘s cognitive and moral values and apparent emptiness that needed to be addressed before one could be effective in selling the national culture which goes far beyond national costumes or dresses, cultural dances and rectories about one’s cultural heritage”.

But what is wrong I must say is the new cultural dictatorship of relativism whereby dirty money accumulated by politicians and fraudsters have become tolerable in our society. Those who work hard are made to go through excruciating obstacles even as the persons predisposed to corruption especially in public service are having their ways. The anti-graft crusade is deeply politicized.

But why do we tolerate the kind of massive heists that take place in public offices by political office holders? Why do we allow governors to become emperors overnight and to corner the common assets of their states to their private ownership?

Why do we still tolerate persons who come into public offices as debtors to their local banks but are transformed into billionaires when they effectively start exercising executive functions in the center or at the States? Why are the state governors enjoying the privilege of stealing without been prosecuted whilst in office thereby letting them amass illicit wealth to be able to stay out jail even wheb they are dragged to courts after they are through with their tenures in office? Why retain section 308(1) of the Constitution which grants immunity from prosecution to governors, President, his vice and deputy governors? Why are the national legislators granting constitutional immunity to themselves in the guise of constitutional alterations.

Are Nigerians waiting to reach the stage of the present day Venezuelans before they can demand accountability and transparency from politicians publicly and vociferously? Why are Nigerians too docile even amidst mass poverty and collapse of governance?

These questions flashed through my subconscious today whilst reading through the current edition of Economist magazine.

The Economist has done a special edition on Venezuela and what i read brought tears to my eyes and also served as a rude awakening that Nigeria is nearing the stage that those Venezuelans are right now. Venezuelans are starving and can't find medication in hospitals.

Venezuelans can't find essential home items to buy. Venezuelans are forced into crossing to Columbia in search of healthcare and food items.

Writing on the catchy topic of Venezuela’s agony, The Economist reminds us all in Nigeria that the political elite whom we have allowed to steal our resources without demanding accountability will sooner rather than later drag our economy to chaos and the people of Nigeria will inevitably be unable to eat balance ration of food daily.

The journalist who anchored the cover for The Economist started rhetorically thus: “Venezuela claims to have more oil than Saudi Arabia, yet its citizens are hungry."

"An astonishing 93% of them say they cannot afford the food they need, and three-quarters have lost weight in the past year", the reporter affirmed.

The Economist also asserted that: "The regime that caused the present tragedy professes great love for the poor. Yet its officials have embezzled billions, making Venezuela the most corrupt country in Latin America, as well as the most ineptly governed. It is a textbook example of why democracy matters..."

"That is is perhaps why President Nicolas Maduro is also so eager to smother what little is left of democracy in Venezuela."

"On July 30th,barring a last minute change of mind Mr. Maduro will hold a rigged election to rubber stamp the creation of a hand-picked constituent assembly, " The Economist predicted.

The Venezuela's agony is a lesson for Nigerians to stand up now and demand open government. Nigerians must eschew Ethnicity and Religious differences and ask their politicians the right questions and demand the right questions. Political offices must not be used as a one way ticket to wealth at the detriment of the rest of the society. Political offices must be sacrificial.

Nigerians must ask question why President Muhammadu Buhari has spent more time in foreign hospitals at grave costs to the public fund. It's either we ask the relevant questions or we become like the present day Venezuelans who are going through a hell of a time due to their docility towards their rotten and corrupt political elite.