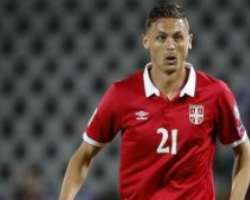 Jose Mourinho says Nemanja Matic is desperate to seal a move to Manchester United but stopped short of confirming that the transfer has been finalised.

The Chelsea midfielder reportedly underwent a medical on Sunday and a picture of him wearing United training gear began to circulate on social media.

Mourinho, who signed Matic as Chelsea boss in 2014, says the 28-year-old is keen on a reunion at Old Trafford but insisted that he will not discuss the matter in detail until the deal is concluded.

“I’m waiting for news,” the United manager said after watching his side beat Valerenga 3-0 in a friendly in Oslo.

“We have a chance. In football, until it’s official, I saw many things happen… I refuse to say more than I’m telling you now.”

The photograph of Matic showed him wearing a training kit adorned with the number 31, which was vacated by Bastian Schweinsteiger when he left for Chicago Fire in March.

Mourinho, however, said he does not know if a medical was conducted while he has been with the senior squad in Norway.

“I don’t know because I was not there,” he said. “Number 31 is a free number. It was Schweinsteiger but it’s a free jersey. We have a few free.