Four arrested for raping teenager, and shaving her head thereafter 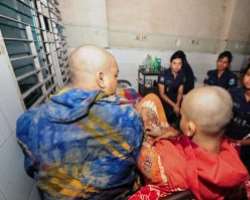 Bangladesh police have arrested four men over the rape of a teenager whose head was shaved as punishment by the accused’s wife in a case that has shocked the conservative country, an official said Sunday.

Police detained the four men including Tufan Sarker, a unionist linked to the ruling Awami League party, after pictures of the victim and her mother at hospital with shaved heads caused outrage.

A manhunt is still underway for Sarker’s wife Asha Khatun, who is accused of dragging the teenager and her mother to their home, beating them and forcibly shaving their heads.

Sarker, 25, has been charged with raping the 16-year-old at home on Friday, said local police spokesman Sonaton Chakroborty.

“He threatened to kill her and her mother if she would dare to talk to anyone about the incident,” he told AFP.

Another officer told AFP that Sarker was a local leader of the labour wing of the Awami League, which has been ruling Bangladesh for most of the last decade.

Photos of the victim and her mother at hospital with their heads shaved spread quickly online, outraging Bangladeshis who urged police to take prompt action.

The victim, whose identity has not been disclosed, said Sarker’s wife suspected she had engaged in a relationship with her husband.

“They shaved my entire head. I repeatedly apologised but they didn’t listen. They even beat my mother and shaved her head,” she told a local news channel.

Police said they were also pursuing Sarker’s sister-in-law, a councillor in Bogra city, for allegedly abetting the assault by sending thugs to help beat the victims.