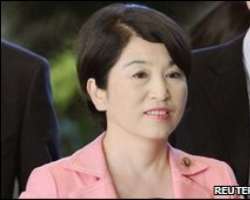 Japan's socialist party has voted to leave the ruling coalition because of a row over a US base in Okinawa.

The Social Democratic Party (SDP) had opposed PM Yukio Hatoyama's decision not to move the US Futenma airbase off the southern Japanese island.

On Friday Mr Hatoyama fired SDP chief Mizuho Fukushima from her ministerial post over her stance on the issue.

The SDP has few seats in parliament but the coalition deal secured the ruling party a majority in the upper house.

The decision came at a meeting of senior party officials.

“We will leave [the coalition] but we will explore relations with other parties in both houses of parliament,” SDP secretary-general Yasumasa Shigeno told journalists.

The ruling Democrats have a large majority in the lower house, which they can use to force legislation through the upper house.

But the SDP's departure will come as a blow to Mr Hatoyama, whose approval ratings have been plummeting.

He also faces his first electoral test in July since last year's election, with polls for the upper house.

Ms Fukushima was fired as consumer affairs minister after she refused to sign off on the Futenma deal.

Mr Hatoyama had said during his election campaign that he would revisit the issue with the US – but then confirmed last week that the existing agreement to relocate the controversial base to the north of the island would stand.