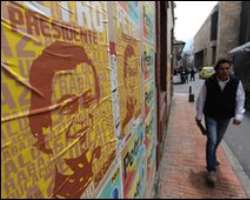 Colombians are due to go to the polls to vote for a new president in a contest that is expected to be close.

The popular incumbent, Alvaro Uribe, is standing down after two terms.

Former Defence Minister Juan Manuel Santos, who is supported by Mr Uribe, has a slight lead in opinion polls.

However he faces a strong challenge from former Bogota Mayor Antanas Mockus of the Green Party. A run-off between the two candidates is expected on 20 June.

The other main candidates are Noemi Sanin, of the Conservative Party, Gustavo Petro of the Polo Democratico, German Vargas Lleras of the Radical Change party and Rafael Pardo of the Liberal party.

Quality of life
Mr Uribe still has approval ratings of 60% after almost eight years in power.

Analysts say this is largely due to his hard-line, US-backed security policies that have curbed guerrilla activities and reduced drugs crime.

Although this has given Mr Santos the edge, the reduction in violence in Bogota has also boosted Mr Mockus.

He is seen as having improved the quality of life for citizens in the capital, with public works projects.

His supporters point to his economic record, while his critics say he is too inexperienced to run the country, in particular in maintaining the pressure on the left-wing rebels.

Mr Santos's supporters point to the successful tough line he took against the rebels.

The BBC's Jeremy McDermott in Colombia says that given the closeness of the opinion polls, it seems Colombians favour both change and continuity.

He says Mr Santos comes from unrivalled political stock and has a long and exceptional record in public office.

But Mr Mockus has promised to break with past political corruption and that idea is intoxicating for many Colombians tired of scandals.