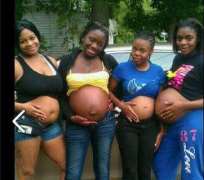 In this report, Odimegwu Onwumere writes that Nigeria is experiencing high rate of pregnant girls between ages of 15-18. This was conversely heralded by National Population Commission (NPC) in 2013 that the occurrence might increase to over 60 million by 2015. Today, a huge number of them drop out from school, die while giving birth due to their immature pelvis; some others earn C-Section as a result of pregnancies many of them do not voluntarily get but are victims of rape

Millions of teenage girls in Nigeria are pregnant and the numbers are on the increase, authorities lament. Although, sexual exploitation, lack of knowledge, gender inequality, violence, child and forced marriage, cultural and religious beliefs are fingered as factors responsible for the woe.

In 2013, the National Population Commission (NPC) heralded that this happening might swell to over 60 million by 2015. And this is circumspect of prophesy as the sarcasm in 2017 is that majority of the girls are not only pregnant, but have also dropped out of school.

The ones that had not been enrolled in schools before they were impregnated outnumber the rate that has dropped out of school, specialists say; adding that this is though prevalent in the Northern part of the country and in the rural areas. Investigations further reveal that 3 out of 10 teenage girls in the North or more, are pregnant than in the South, where experts say the ratio is 1 out of 10.

Buttressing this, a 2013 report says, “Analysts blame early marriage for adolescent pregnancies, after surveys like the National HIV/AIDS and Reproductive Health Survey which show 73% of girls aged 13 to 19 are married in northeastern Nigeria.”

While some are married, many others are mothers or pregnant out of wedlock and were not ready. They are exposed to medical risks, because they are yet to have developed pelvis, which often lead to difficulties in child birth. To this extent, many of them end up in Caesarian Section (SC), or bite the dust.

Recently, the United Nations Population Fund (UNFPA) clamoured that Nigeria rates 47 per cent in out of school girls on the UNFPA’s State of the World Population 2016, out of which are 18-year old teenage-mothers or pregnant ones. In this regard, some national records lecture that the number of teenagers being pregnant is even worse, as Nigeria is facing recession for over two years.

In the records released by The Nigeria Bureau of Statistics (NBS), “2.6 million Nigerians became unemployed within the first and second quarters of 2016, bringing the figure to a scary 22.45 million, higher than the 20.7 recorded in 2015… This is having an effect on the education index.”

This is even as the United Nations International Children’s Fund (UNICEF), adds, “No fewer than 10.5 million Nigerian children are out of school and more will join the growing list of school leavers, mostly girls, due to the current hard times.”

While hyping on the data concerning Nigeria’s segment of the UNFPA’s account, a Deputy country representative of UNFPA, Mr Eugene Kongnyuy, says: “If we look at data from Nigeria, we find that 43 per cent of girls get married before 18, and 17 per cent of them even before 15. We notice that for girls that are not in school, the percentage is even higher, it is 82 per cent. They will get married before 18.”

In the 2013, a Federal Commissioner of the NPC in Kogi State, Mohammed Akubo Aikoye while speaking at that year’s World Population Day in Lokoja, expressed concern, saying, "Going by the Nigeria Demographic and Health Survey (NDHS), adolescent fertility in Nigeria in 2008, topped other African countries with 121 live births per 1,000 births, stressing that this is relatively high when compared with other African countries that have considerably reduced adolescent fertility rates... The increasing rate of teenage pregnancy in the country can be esteemed against the background that about one third of Nigeria population, that is 44.5 million young people between the ages of 10-24, got pregnant in 2006."

Worried by this development, pundits are of the view that Nigeria may not achieve the global desire for Sustainable Development Goals (SDGs), which started on 25 September, 2015, with the United Nations (UN) including a set of 17 SDGs to terminate poverty, fight inequality and injustice, and tackle climate change by 2030. Experts further express panic that the trend is not only affecting the pregnant teenagers, but also the country at large in the areas of morality, economy and wherewithal.

Being a religious country, the families of these teenagers are brought to disrepute by friends and family members with insinuation that they were weak to bring up their female children with moral and religious standards. This leads to some of the pregnant teenagers who cannot withstand the heat from their loved and hating ones to go for unsafe abortion.

But abortion is illegal in Nigeria, except that which is preferred to save the lives of legitimate pregnant women. Observing that most of the pregnant teenagers go for unsafe abortion in the county, the World Health Organisation (WHO) in the recent past exclaimed that under 20 years of age teenagers in developing countries go for unsafe abortion culminating to approximately 14 per cent ratio. The international organisation shows worry that unsafe abortion is among the reasons that lead to maternal mortality deaths of (2000 women for each 100,000 births). Some even develop obstetric fistula, due to their babyish birth canals.

Exploration by this writer shows that unsafe abortion has led to deaths of 15-19 years old girls and many have lost their pregnancies; unsafe abortion is the second causes of maternal and mortality deaths.

According to a source, "Study has shown that in developing countries, which include Nigeria, babies born to mothers under 20 years of age face 50% higher risk of being “still births” or dying in the first few weeks as against those born to mothers aged between 20 and 29. Babies born to teenage girls are more likely to have low weight with risk of long-term health challenges."

However, inspections reveal that many of the girls have sex unprotected leading to them not only being impregnated, but also contract different diseases especially HIV. Albeit, opinion leaders say that most of the pregnant girls are even victims of rape.

For example, "Rape Studies from South Africa have found that 11-20% of pregnancies in teenage girls are directly linked to rape, while about 60% of teenage mothers had unwanted sexual experiences preceding their pregnancy,” experts at Wikipedia, a branch of Wikimedia Foundation, Inc., an international non-profit organization say.

Furthermore, “A US research institute has also found that 60% of girls who had sex before age 15 were coerced by males who, on average, are six years their senior. One in five teenage fathers admitted to forcing girls to have sex with them. Up to 70% of women who gave birth in their teens were molested as young girls."

Odimegwu Onwumere is an award-winning journalist based in Rivers State, Nigeria. He contributed this piece via: [email protected]