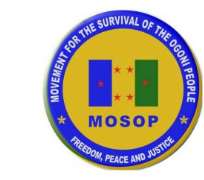 The Movement for the Survival of the Ogoni of the Ogoni People (MOSOP) strongly disapproves and condemns the entry into Ogoni through the back door by Shell/NPDC for oil production activities under military shield.

MOSOP thus demands the immediate withdrawal of Shell/NPDC from all parts of Ogoniland.forthwith.

MOSOP further warns that the oil corporations will be held responsible for any crisis that erupts in the area.

We are concerned that while Shell/NPDC has refused to make its contributions for the Ogoni cleanup, it continues to make irresponsible maneuvers to re-enter Ogoniland for oil production. Inadvertently, Shell/NPDC wants Ogoni to pay for the cleanup of the environment.

MOSOP wants to make it clear that oil resumption is not on the Ogoni card at the moment. Moreover, the state of the Ogoni environment cannot support further production of oil at this time.

We note that it is actions like this that has pitched the communities against the oil companies and led to gross human rights violations and the current crises in the entire Niger Delta.

We would further warn that failure to heed our demand regarding immediate withdrawal from Ogoni, we would have no choice than to take all civilized steps to ensure justice for the Ogoni.

Signed:
Fegalo Nsuke
Publicity Secretary
The Movement for the Survival of the Ogoni People(MOSOP)