Says they are mischievous, used by the opposition
By Nofisat Marindoti, The Nigerian Voice, Osogbo 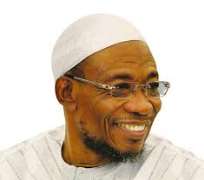 The Osun State Government under the leadership of Ogbeni Rauf Aregbesola has reacted to allegation of the 2011/2012 group of pensioners led by Comrade Ilesanmi Omoniyi, that the government is trying to divert the Second tranche of the Paris Club Refunds.

The group of pensioners while addressing press men earlier in the day, had accused the State Governor of planning to divert the funds by the ambiguous statements he made shortly after receiving the money.

However, in a statement signed by the Commissioner for Information and Strategy, Adelani Baderinwa said the pensioners have only chosen to be blackmailing the Osun State Government on the payment of pension.

Baderinwa said it is obvious the group is being used by the opposition from their incessant baseless allegations and protests.

According to the release, "It is unfortunate that senior citizens of Osun state have chosen to be blackmailing the Osun State Government on the payment of pension. The 2011/2012 set of pensioners were the one that made accusation some three weeks ago that the state government had received the second tranche of Paris Club refund and diverted it when the fund had not been paid at all.

"When the money was finally paid last week, the state government announced that it has received it. Yet, the same set of 2011/2012 pensioners have come out to allege that the Ogbeni Rauf Aregbesola’s administration wants to divert the money.

"We appeal to these set of pensioners to desist from being used by the opposition as it is obvious. There is a standing committee led by Comrade Hassan Sunmonu that allocates and distributes fund to every sector and individuals.

"Aregbesola has always been paying the salary of the state workers alongside the pensioners with the available resources, so it is out of place and mischievous for the 2011/2012 pensioners to make allegation that the governor wants to divert the Paris club money.

"The 2011/2012 retirees are not the only pensioners in Osun. Something is fishy on their incessant baseless allegations and protest. Other pensioners in the state have not been acting that suspicious like those calling themselves 2011/2012 set of pensioners.

"It is important to state that other pensioners in the state have been appreciative of the Aregbesola’s commitment to the payment of their pensions, despite the financial challenges. Aregbesola has prioritized the payment of salary and pensions of the workers and senior citizens of the state.

"Aregbesola had used the first tranche of the Paris club refund to pay three months salaries and pensions in 2016 without any agitation from the workers and the pensioners. The governor would also make use of the second refund judiciously.

"The allegation of the 2011/2012 pensioners is spurious and their actions is unbecoming of senior citizens." Baderinwa added.