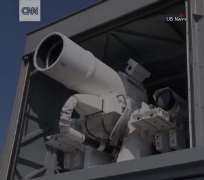 The U.S. Navy successfully tested the world's first laser gun system that has been designed to target drones. The Laser Weapons System ( LaWS ) gun was tested by the USS Ponce, an amphibious transport ship on a mock enemy drone, CNN reported  Monday.

Naval officers claim the laser moves at the speed of light, is “more precise than a bullet” and is expected to be used in combat by the year 2020,  reports said .

The speed of LaWs is 50,000 times the speed of an incoming intercontinental ballistic missile. The new technology does not need heavy and costly missiles and is operated by electricity derived from a small generator. A three member crew can operate the $40 million setup. Moreover the cost per shot is just about a dollar.

Lt. Cale Hughes, a laser weapons system officer, told CNN it throws a massive amount of protons at the target and that officers do not have to worry about the range or wind and the target can be engaged at the speed of light.

Unlike other weapons, the strike in this case happens silently. As soon as the laser makes contact with a drone, the vehicle heats to a temperature of more than 1,000°F and explodes. “It operates in an invisible part of the electromagnetic spectrum so you don’t see the beam, it doesn’t make any sound, it’s completely silent and it’s incredibly effective at what it does,” said Hughes.

The U.S. Navy also claims this would reduce the collateral damage during the time of war. “I no longer have to worry about rounds that may go beyond the target and potentially hurt or damage things that I don’t want to hurt or damage,” Chris Wells, captain of the USS Ponce told CNN.

U.S. navy officials have said that primarily, the technique would be used to destroy small boats and aircrafts. They also claimed the weapon was designed to counter bigger airborne and surface-based threats. U.S. navy officials said the weapons have proved to be effective in the last three years.

This comes while President Donald Trump looks to make the U.S. Navy stronger, having said he wants to build dozens of new warships in one of the biggest peace-time expansions of the U.S. Navy.

The initiative could cost nearly $700 billion in government funding, take 30 years to complete and require hiring tens of thousands of skilled shipyard workers.