I just felt like killing him, she confesses
By Nofisat Marindoti, The Nigerian Voice, Osogbo 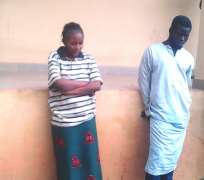 The Osun State Police Command on Monday paraded a 39 year old woman, Omotayo Salaudeen who arranged and also partook in the killing of her husband, Alhaji Salawudeen Hakeem aged 43.

Omotayo was paraded along side her accomplice, Oladapo Dolapo aged 24, who actually stabbed the deceased four times while the wife blocked his breathing with a pillow.

While parading the suspects, the Commissioner of Police, Olafimihan Adeoye said that the lady not only arranged for the death of her husband but also participated actively.

He explained that the case was brought to the station on May 12, 2017 by Engr. Salawu Adeshina Jimoh who reported that on the same day around midnight, two unknown men entered into his brother's house at No 11, Adeniran street, Hallelujah estate in Osogbo and stabbed him with knife to death while nothing was carted away from the house.

CP Adeoye said the police swung into action after wards and were able to arrest the main suspect, Dolapo who confessed to killing the man with the help of his wife.

He said the woman was also arrested and after some pressure, she confessed to the crime.

CP added that the woman had been threatening her husband for long and had even tried to set him ablaze once.

While assuring that the suspects would soon be properly prosecuted, the Police Commissioner urged men who might be facing similar challenge to report to the necessary quarters to avoid possible disaster.

When asked why she killed her husband, Omotayo who confessed they even made love the night she killed him, couldn't state any specific reason.

She said she just wanted to do away with him.