No, Beyonce did not reject Kim Kardashian's baby gifts as reported 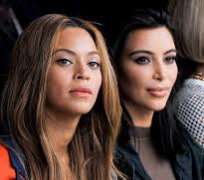 Beyonce did not reject Kim Kardashian's baby gifts for her newborn twins, despite an entirely fabricated tabloid report. Gossip Cop can exclusively set the record straight.

As Gossip Cop reported, Beyonce and Jay Z welcomed twins last month, but an article in the latest issue of Heat claims the couple refused to accept a set of presents from Kardashian and Kanye West. A supposed “source” tells the magazine, “Kim sent one of her KKW contouring kits, in a gold box, worth $150,000,” but the singer gave the expensive gift away to the hospital staff.

The outlet's dubious insider says the reality star “also sent about $10k worth of clothes for Blue [Ivy] from her and Kanye's sold-out children's fashion line and she'd had some pieces specially tailored for the infants.” But the questionable source then claims Beyonce gave all of Kardashian's presents “to the nurses in the hospital for their kids.” Despite how unlikely this all sounds, Gossip Cop still checked in with multiple sources close to the situation, and we're exclusively assured that no one in either Beyonce or Kardashian's inner circle is speaking to Heat. We're further told that this supposed incident involving discarded baby gifts simply “never happened.” Of course, the tabloids are often trying to create a fake rivalry between the two famous women, so this latest bogus example comes as no surprise.

Gossip Cop recently called out RadarOnline for publishing a phony article about Kardashian trying to steal Beyonce's “twins thunder.” We also busted Celeb Dirty Laundry when it wrongly reported Beyonce and Kardashian were competing over kids' clothing lines . There have been numerous similar stories alleging a feud between the singer and reality star, but the narrative is entirely false.