WITH YAR'ADUA, NORTH HAS TAKEN ITS TURN IN ROTATION ARRANGEMENT – IKEDIFE, EX-OHANAEZE CHIEF 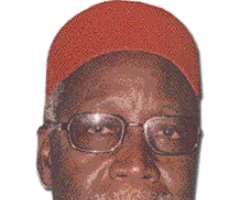 Ikedife
Chairman of Anambra Elders Forum and the immediate past President General of Ohaneze Ndigbo, Dr Dozie Ikedife, has declared the country's democracy as epileptic, while expressing hope that it would still stabilize.

He said it is difficult to assess the late President Umar Musa Yar'Adua administration because of the circumstances that surrounded its three years in office, even as he is believes that the late president would have made a difference if he completed his tenure.

On the controversy surrounding President Goodluck Jonathan's rumoured presidential ambition Ikedife said that anybody who works against it would be fighting God. He said that P Jonathan's emergence, as president was an act of God, adding that PDP zoning arrangement could easily be dropped since it is backed by the constitution.

How would you assess democracy in the country?
To a certain extent, one would say that the country is operating a democratic system. It is a new democracy. It has been subjected to abuse, either deliberately or due to ignorance. It has been either deliberate commission or unfortunate omission. Democracy in Nigeria is a nascent democracy. It is a democracy that we are trying to imbibe, even though we started on democratic principles, democratic footing and parliamentary system of administration. In parliamentary democracy, you compete in election; you win and then become a member of a legislative house. If your party is in majority you form a government and if it is the next largest in minority you become the main opposition.

However, in fullness of time, we began another experiment in 1979. We elected Alhaji Shehu Shagari on the platform of the National Party of Nigeria (NPN). They were seriously challenged, but at the end of the day they got judgment that they satisfied the condition for establishing a government and a condition for producing president of the country.

In 1983, another election was held, and a few months after, the military came in again and continued till 1999. And from 1999 till date, we have had democracy, even though sometimes practiced by people who are out of military khaki and adoring agbada. And the principles of democracy were not flowing in their blood yet. There was a tendency to call it democracy in name, but autocracy in practice. But that has come and gone and we now changed over, not too long ago, precisely 2007, to another civilian head of state. It was the first time we had a civilian head of state since. From 2007 till now it is three years. By next year, we shall be having another election to select another president.

What of in the last three years?
It is difficult to judge the late Alhaji Musa Yar'Adua for the three years he ran this country. There are many reasons. The election that threw him up in 2007 was flawed. It failed to reach the standard expected for acceptance by both local people and international observers. It was a matter of massive rigging and up till now battles are still being fought in courts and tribunals about the legitimacy of who won certain elections. However, Yar'Adua was determined. He wanted clean elections. He wanted to clean up the Electoral Act. Unfortunately, he was challenged at the tribunal for two years of his three years reign. Soon after the cases were decided he took ill. He was ill for about seven months before he died. So it is difficult to assess his performance.

But you can only judge by the statements he had made on various occasions. Many of us are sure we will have proper democracy because you don't need three heads to make democracy work. It is one head that is needed. We keep planning.

If Nigerians are learning they should examine how American election came and went. The election was smooth and before the results were announced the likely loser, who knew he was going to lose, congratulated the winner and threw in the towel. Look at the British election. I think that is what we will begin to emulate. Change of power took only two hours and it was over. And that is what I would like to see before I die; change over without so much rancour. There is no election tribunal in Britain because everything is transparent.

Do you think there will be change in Nigeria?
Well, within the firmament, you can see a ray of hope; hope for better time, hope for better election, hope for more democratic election. A case in point is Anambra State governorship election of February 6, 2010. Even though many people were disfranchised by the omission of their names in the voter's register, others voted peacefully. And the results were announced there and then. A tribunal has been set up. It went on smoothly. It shows that if Nigerians are well informed there would be clean and orderly elections. A I would say that Yar'Adua wanted the clean up the election process so that democracy will thrive and I do hope that democracy will really thrive.

But in all these, who is to blame?
The electorate do not falsify results. It is the politicians who do. They see it as a game. They even feel at ease when you challenge them. They are confident to say this is politics. By my own understanding, politics doesn't mean cutting corners. It doesn't mean being dishonest. It means manoeuvering with facts rather than with falsehood. So, the blame rests squarely on the table of politicians who want to win by hook or crook. They see election as a matter of life and death. It must never be so. And once you get people worked up, to the extent of saying that election is a matter of do or die, you are fanning the amber of anarchy and trouble. We don't want that.

What are your views on huge spending on election?
Of course, you don't have to engage in huge spending. I advocate that elections spending must be pegged and monitored. If you spend that huge sum of money to gain advantage of your opponent it is understandable that you will, first, try to recoup what you spent before doing anything for the electorate. Unfortunately, some people regard fighting for an elected position as an investment. If you invest so much you must get that much, plus interest, otherwise you shouldn't. That is an unfortunate attitude, an unfortunate approach. You should not spend a certain fraction of money to get elected. It shouldn't be an amount that will necessitate you going to a bank manager for loan or even your wife to help you out. It is not the proper thing.

There is a rumour that Jonathan is interested in contesting next year's election. What do you think?

I don't see why he should not run for 2011 presidential election. There is an unwritten understanding in the Peoples Democratic Party (PDP) that the presidency will rotate within the North and the South. I'm quite sure that they did not say that it would go to the North and stay a number of years and go to the South and stay this number of years. When they were doing that, they didn't know that there is God who can edit and re-write what they have written.

Obasanjo managed to get a second term and stayed for eight years. If someone from the other side (North) manages to stay just two days and dropped by any means, it has gone to the North. It should, therefore, go to the South, even in interpreting their understanding, which they is foisted on Nigerians as if it were part and parcel of Nigerian constitution. It is not. It is perhaps, a convention or mutual agreement or even written agreement between members of the PDP.

Northerners moving against Jonathan in 2011 are looking for trouble. And this dynamite they are trying to light will explode in everybody's face. The young man is working very hard. I'm sure of that. I'm quite satisfied that Jonathan is working hard and he is working in the overall interest of Nigeria. He should be allowed to continue. He is God ordained and his name follows him. This is an act of God and don't try to oppose God. He didn't set out to be the president of this country, but God has made it possible. If you fight that you must know that you are fighting God and you know what it means to fight God.