THOSE TO WATCH IN 2011 PRESIDENTIAL RACE 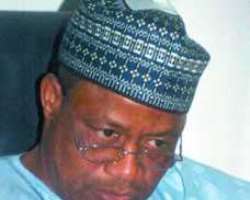 IBB
Just a year to the end of the present administration and the formation of another government, not much is on ground to suggest that the nation is on a smooth transition. The road to 2011 is already strewn with thorns that may lead to another uphill attempt at organizing credible elections.

There are already two versions of tentative timetables for the 2011 elections released by Independent National Electoral Commission (INEC). The presidential election, which will be the last election, would either be conducted on January 22 or April 23.

According to INEC, the timetable is tentative pending when the National Assembly (NASS) would have concluded work on the Electoral Reform Bill. Meanwhile, the NASS doesn't seem to be in a mood to expedite action on the constitutional amendment that would incorporate the electoral reforms.

The Justice Mohammed Uwais electoral reform panel had recommended that elections must be concluded at least six months before taking oath of office to enable any litigation on petitions to be concluded. It is based on this premise that INEC had proposed January 22 next year for the presidential election. The Senate and the House of Representatives will have to pass its own amendment Electoral Act before the positions of the two chambers of the NASS are harmonized for the 36 Houses of Assembly to endorse. This is not an easy task as it takes so much time to arrive at.

The perceived lull in political activities has to do with the situation in the NASS. There is the fear that the number of political parties that will be operating in the country will be drastically reduced and there may likely be delineation of constituencies. The criteria for pruning down the number of parties are not yet known. The Senate has proposed two parties but was turned down by the House of Representatives. What will set the tone and accelerate the tempo of political activities in the country will be the outcome of the constitution amendment.

However, in order not to be taken unawares, politicians are already engaged in horse trading to be sure that they cut a pie of the action to remain relevant in the next dispensation. The action is the presidency, where the buck stops. While some have declared their interest to run for the coveted office, others are still watching the political pendulum to the see the direction it will likely swing.

The action still remains the presidency and the issue is undoubtedly the ruling Peoples Democratic Party (PDP) that is consolidating its hold in the country and its determination to even penetrate and deplete the opponent's strongholds. It is still the only party with a strong national spread.

The mega party idea that was touted to provide an alternative platform and challenge the ruling party was stillbirth. The more the proponents gathered to discuss it, the more discordant they became and ultimately scattered. The proponents had already gone their different ways. Former Vice President Atitu Abubakar, who was one of the midwives of the mega party had since returned to the PDP with his group and Muhammadu Buhari equally, has abandoned the project. For now, the remnants of the mega party have been announcing that the party will be launched and it has not come to pass. The mega party project may die like other political alliances in the past. Political alliance is yet to work in the country. Nigerian Peoples Party (NPP) led by the late Nnamdi Azikiwe, Unity Party of Nigeria (UPN), led by the late Obafemi Awolowo, Peoples Redemption Party (PRP) led by the late Aminu Kano and Great Nigeria Peoples Party (GNPP) led by the late Waziri Ibrahim tried to form alliance to wrest power from Shehu Shagri and his National Party of Nigeria (NPN) in the Second Republic but they failed to agree. In 2007, alliance was also proposed to stop PDP but it failed.

As it stands, since PDP is the issue in Nigeria's politics today, the issue of zoning of political offices will shape the politics of the country. Already, zoning is generating much heat. Some power brokers in the North are holding to the zoning arrangement in PDP while some southerners say that zoning is an idea whose time has passed. If the zoning formula subsists, the presidential race will only be open to northerners and the president will be excluded from running.

Tracing the history of zoning in the party, the first national chairman of the party, Solomon Lar, at the formation of the party, all the leaders supported the idea of zoning and it was decided that an eight-year term should be allowed for the South and another eight years for the North. Since the death of President Umaru Yar'Adua from the North and the emergence of Goodluck Jonathan from the South as the president, there is so much hue and cry for the jettisoning of the zoning arrangement to pave the way for Jonathan to run. This agitation may likely win at the end of the day.

Even though Jonathan has not openly declared his interest, there are strong indications that he is running for the presidency. His body language speaks eloquently of his ambition coupled with his interview with Cable News Network during his visit to the United States of America.

The fear of Jonathan running will send many aspirants to drop their ambitions. Jonathan will be like the crocodile, when it appears lesser aquatic creatures scamper for safety. If he runs, that will be the first major election he will be contesting. He had ridden on the back of mother luck to get to his present position. One thing is certain, as the acting president, Jonathan has all the power and authority of the state, if he has the liver; he can deploy it to his own advantage.

Political watchers know that he is politically naÃ¯ve without former President Olusegun Obasanjo who picked him up to run with president Umaru Yar'Adua and now he is riding on the back of the former president to consolidate on to power and plan ahead of 2011.

Jonathan does not have political structure and has not contested a major election. It was mother luck that threw him up to become the governor of Bayelsa State when Obasanjo used the apparatus of the state to engineer the impeachment of Diepreye Alamieyeseigha the then governor.

But Jonathan cannot leap because he does not know where to land. Obasanjo is said to be the driving force behind his 2011 presidency.

As it stands, if Jonathan and Obasanjo have their way and he runs in the 2011 presidency, after 2015, Jonathan would be compelled to go for second term that will terminate by 2019.

The travail of Vincent Ogbulafor and his eventual resignation as the PDP chairman is not unconnected with the 2011 ambition of the president. When Jonathan was confirmed the acting president, Ogbulafor believed to be a Yar'Adua supporter dabbled in political error by telling Jonathan that the presidency will still remain in the North in 2011. As federal CEO expands his war chest towards 2011, he has to remove all clogs in the wheel of his ambition. Ogbulafor became one of the victims.

It is not in our character for a president to conduct a primary or general election that he would lose bearing in mind that the aspirant that will win a primary election is the one who regulates the mechanism of control. Jonathan is in charge of such mechanism in PDP. If he wants, he could emerge through affirmation in the same manner Yar'Adua emerged.

But he will have a stiff opposition from former military president, Ibrahim Babangida. As a retired general, IBB would not go to war without counting the cost. He has declared for the presidency and has revived his political structures. He commands loyalty among the politicians and his old allies. His drawback is the June 12 presidential election that was the freest election that he annulled.

On chances of IBB getting the party nomination against Jonathan, Brady Nwosu, a gubernatorial aspirant in Imo State, said if a credible party primary is conducted in PDP, Jonathan will lose the first major election he will be contesting.

Within the PDP, other names are lined up for the 2011 presidential election.

Aliyu Mohammed Gusau, retired military officer and national security adviser is one of them. He was security adviser to Obasanjo and contested for the PDP's presidential ticket with Yar'Adua but lost. He is an experienced politician with international clout. His drawback is his lack of structure having been in the corridors of power for long. Even in his Zamfara State PDP, he is only in charge of a faction.

Governor Bukola Saraki of Kwara State is another contender to the exalted office. He is the most visible among his colleague governors. His chairmanship of the all-powerful Governors' Forum adds up to his resume and he has been a power broker especially during his second tenure. His drawback is the baggage of identity.

Isa Yuguda of Bauchi State is also mentioned as having his eyes at Aso Rock. He is the son of in-law of the late president, Yar'Adua. He was a breakaway disciple when he left PDP for ANPP on whose platform he won the gubernatorial election in Bauchi. He later returned to PDP where he believes his aspiration would come to fruition especially with his relationship with the former first family.

Former Vice President Atiku Abubakar is one of the cerebral politicians in the country. He has large followership. With Peoples Democratic Movement (PDM), a political platform he inherited from the late Chief of Staff, Supreme Headquarters, Shehu Yar'Adua, he employed it for the emergence of former President Olusegun Obasanjo to emerge winner at the PDP party primary in Jos in 1998.

He emerged Obasanjo's deputy. His growing influence made Obasanjo uncomfortable and the ex-president set to decimate the group and he succeeded in decapitating the group. Abubakar was frustrated out of PDP when he wanted to contest for the presidency.

Some other politicians from other political parties are equally interested in the presidency like Muhammadu Buhari, who has since 2003 become a permanent presidential candidate, is also interested in 2011. He was the ANPP presidential candidate in 2003 and swept the northern states but lost. In 2007, he lost out again and went to court. The apex court in 4-3 split decision ruled that he didn't win. He dumped ANPP and has pitched tent with little known Congress for Progressive Change (CPC) where he wants to actualize his presidential dream in 2011. He was one of the proponents of the mega party project but couldn't work with other politicians to present a formidable party that will challenge the rampaging ruling party.

In the Peoples Progressive Alliance (PPA), former Abia State governor that flew the presidential flag in 2007 still holds the ace to fly the party's presidential banner.

AC is yet to reel out its political programme for 2011. Its presidential candidate in 2007, Atiku has left the party. In order to make an impact in 2011, the party is shopping for a candidate that has national outlook. The leadership of the party had dangled the presidential ticket before IBB to run with Bola Tinubu, ex-Lagos governor. The party reasoned that with the former military ruler's political clout, it was possible for the party to form the next government at the centre.