Gross Abuses of Human Rights In Nigeria: Demanding For FEC Approved Special Criminal Investigations Board And 3-in-One Judicial Commissions Of Enquiry Within 90 Days In Compliance With Int’l Law’s Principles Of Complementarity & No Impunity(Part One) 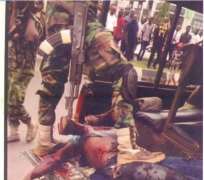 Abuja, Federal Capital Territory, Nigeria
Sir,
Gross Abuses of Human Rights In Nigeria: Demanding For FEC Approved Special Criminal Investigations Board And 3-in-One Judicial Commissions Of Enquiry Within 90 Days In Compliance With Int’l Law’s Principles Of Complementarity & No Impunity(Part One)

(Intersociety Nigeria, 29th June 2017)-We are Int’l Society for Civil Liberties & the Rule of Law ( www.intersociety-ng.org ). We thematically advocate for promotion and advancement of civil liberties and rule of law, citizens’ security and safety; and democracy and good governance including integrity, probity and accountability in governance.

Recall Sir that Nigeria had since 29th May 2015 when the Buhari/Osibanjo’s sixth central civilian Government which you now head in acting capacity came on board; recorded gross abuses of human rights or commission of heinous crimes amounting to crimes against humanity, war crimes and genocide. The gross rights abuses majorly occurred in the course of counterinsurgency operations in the Northeast undertaken by the Armed Forces particularly the Nigerian Army as well as unconstitutional and violent involvement by the Army in the civil assemblies and processions peacefully organized by social and religious voices in Nigeria or in any part thereof.

The Nigerian Army’s violent crackdowns or disruption of civil assemblies and processions in Nigeria occurred in Northwest (i.e. Kaduna), Southeast and parts of South-south geopolitical zones in periods between August and December 2015 and January/February and May 2016 as well as January 2017. These are classified as State actor fueled or caused gross human rights abuses or heinous crimes perpetrated or carried out in non-war situation or peacetime; amounting to crimes against humanity and genocide.

On the other hand, Sir, the killings by the armed Fulani Herdsmen or Fulani Terrorist Group and other reprisal killings (i.e. killing of Fulani citizens by victims’ group, if any) constitute the bulk of non-State actor gross human rights abuses in Nigeria since June 2015 and they amount to crimes against humanity perpetrated in non-war situation. Over 2800 defenseless citizens including women and children have been killed by the referenced illicitly armed agro-Jihadist group since June 2015 particularly in Southern Kaduna and Benue State and most of the victims are members of rural Christian population. Hundreds, if not thousands of women belonging to the victims’ groups have been raped as well.

It is also on record Sir that till date, the Buhari/Osibanjo central Government which you now head in acting capacity, has refused to declare the armed Fulani herdsmen as terrorist group or armed opposition group and have their mother organization-Miyatti Allah Cattle Breeders Association of Nigeria proscribed in line with extant laws of the Federation. Their leaders and foot soldiers have remained untouchable and an outlaw with on single one of them arrested or put on trial in Nigeria or any part thereof till date.

Sir the war crimes or war related gross abuses of human rights under complaint involve: (1) custody and open killing of civilians or noncombatants by the Nigerian Army in the course of its counterinsurgency operations in Northeast zone since June 2015 including the alleged death in Army custody in Maiduguri of 240 civilians including 29 children aged between new born and five years and (2) the Rann IDP Camp bombing and killing of 236 defenseless civilians on 17th January 2017 by the Nigerian Air Force. These unlawful killings in wartime are classified as war crimes and genocide under int’l criminal law including the Geneva Conventions or Laws of War of 1949 and its four protocols of 1977.

On the other hand Sir, there had been three major non-war or peacetime killings in Nigeria since June 2015 resulting in gross abuses of human rights resulting to over 1,750 deaths and 800 injuries. They include (1) violent crackdown/disruption by the Chief of Army Staff (Lt Gen Tukur Yusuf Buratai), his convoy and personnel of the Nigerian Army of Shiite Muslims’ religious processions of 12th to 14th December 2015, leading to death of over 800 defenseless members of the group and hundreds of injuries. There are also post December 2015 killing of members of the group also called Islamic Movement of Nigeria (IMN) by security forces. In all, a total of not less than 1,120 Shiite Muslims lost their lives to Nigeria’s security forces particularly the Nigerian Army between December 2015 and November 2016.

The second major non-war or peacetime killings in Nigeria were the massacre of unarmed and defenseless pro Biafra activists in Southeast and parts of South-south Nigeria which took place between August 2015 and January 2017, leading to death of over 270 and injuring of over 370 others. The Nigerian Army and the Nigeria Police Force account for 75% and 20% of the killings and maiming respectively.

The third major non-war or peacetime agro-Jihadist killings in the country perpetrated by a non-State actor group called “armed Fulani Herdsmen of the Miyatti Allah Cattle Breeders Association of Nigeria”, who are apparently protected and aided by the State are the ongoing massacre of members of predominant rural Christian population in Nigeria which rose to an apogee since June 2015, leading to death of not less than 2800. There may also have been pockets of reprisal killing of their members by the victims’ groups owing to institutionalized culture of impunity and selective application of law and criminal sanctions in Nigeria.

Sir, these non-war or peacetime killings grossly and gravely violate Nigeria’s 1999 Constitution particularly the citizens’ collective and individual rights to life and protectable and safe living contained in Sections 14 (2) (b) and 33 of the Constitution. Regionally and internationally, they constitute grave violation of Nigeria’s sacred obligations to regional and international human rights treaties or conventions including the AU Charter on Human & Peoples Rights of 1981 and the UN Covenants on Civil and Political Rights and the Economic, Social & Cultural Rights of 1976, ratified by Nigeria in 1983 and 1993 respectively.

They also gravely breach the Principles & Purposes of the United Nations: saving future generations from war, reaffirming human rights and establishing equal rights for all persons; in addition to promoting justice, freedom, and social progress for the peoples of all of its member States.

Sir, while it is constitutionally, regionally and internationally indisputable that members of the Armed Forces of any member-State of AU and UN such as Nigeria are charged with the responsibilities or mandates of rendering defensive services domestically in extreme emergencies such as during internal armed conflict in their country or any part thereof including counterinsurgency operations against Boko Haram terrorism in Northeast Nigeria inclusive, but those exercising such mandates must when called upon or commanded, render the account of such mandates and take full responsibility for their illegalities and atrocities no matter how long it takes.

As you may professorially be aware or unaware Sir, there are no defenses of impunity and immunity for the perpetrators in the commission of heinous crimes or perpetration of gross abuses of human rights in the course of their securitization or professional duties and mandates. This is more so when such defenses are nationally, regionally and internationally outlawed and made inexcusable.

These also explain why the Third Protocol to the Geneva Conventions or Laws of Armed Conflict of 1949 was specifically enacted in 1977 to checkmate the conducts of the combatants of the protagonist and antagonist sides as they relate to treatments of civilian populations or noncombatants including women, children and IDPs in widespread or clustered internal armed conflict (s). The Doctrine of Rules of Engagement and its principles ofuse of force, self defense and exclusion from attacks of non-military necessity and places of worship and religious symbols during armed conflicts and their zones was also put in place.

Constitutionally, regionally and internationally speaking Sir, members of the Nigerian Armed Forces particularly the Army are totally prohibited from involvement in policing or management of peaceful assemblies including social and religious protests and processions in Nigeria or any part thereof. Their protective military and defensive interventions or involvements in democratic dispensation are only strict required during munity, insurrection, internal armed struggle or conflict and externally and territorially threatened inter State armed conflict or natural hazard-induced State of emergency.

Therefore, Sir, Nigerian Army’s supplementary policing roles in the internal security of Nigeria under civil authority or rule or democratic dispensation must not be misconstrued and have nothing whatsoever to do with its recent violent policing or crackdown on religious faithful peacefully engaging in open street religious processions or a group of disenchanted and aggrieved citizens or social voices showing their grievances through church vigils, clustered singing and praises or engaging in ghost and open street protests or roadside picketing in the form of nonviolent socio-political self determination agitation.

It must be clearly stated Sir that the Nigeria Police Force, equipped with modern crowd control kits and equipment other than lethal weaponry are constitutionally, regionally and internationally charged with the responsibilities of protecting and policing civil assemblies in Nigeria or any part thereof, which must be discharged within the confines of international best practices or modern crowd control methods.

Sir, Nigeria is not a zoo or an animal kingdom where anarchy and survival of the fittest reign, but an independent country governed by a set of rules under its 1999 Constitution with clearly spelt out and written constitutional dos and don’ts for its 17,500 appointed and elected public office holders including its 1,625 State and Federal elected public office holders.

These dos and don’ts are contained in Sections 13 (demands inexcusable adherence by public office holders to the provisions of Chapters Two and Four and other provisions of the Constitution) and 14 (2b)(provision of security and welfare by public office holders to the citizens as well as their protection and safe living) of itsfundamental objectives and directive principle of State policy as well as its Chapter Four or Sections 33-46 (i.e.rights to life, dignity of human person, personal liberty, fair hearing and fair trial, peaceful assembly, association and expression, right against indiscriminate arrest and long detention without trial and rights to freedom of movement, thought, conscience and religion/worship, etc).

By Section 33 of Nigeria’s 1999 Constitution, Sir, no citizen shall be killed arbitrarily except in extreme circumstances such as if he or she is an active participant in armed struggle or violent conflict, insurrection or munity. That is to say Sir that where Nigeria’s 1999 Constitution ends in preserving, providing, protecting, promoting and advancing these citizens’ constitutional liberties and human rights including pursuit of happiness; the African Charter on Human & Peoples Rights begins.

Please see Nigeria’s Supreme Court decision in Gen Sani Abacha & Ors v. Chief Gani Fawehinmi (2000) 4 FWLR 533. The relationships between a Member-State of AU and its citizens are also clearly spelt out in Article 19 of same African Charter on Human & Peoples Rights of 1981, ratified and constitutionally domesticated by the Federal Republic of Nigeria on 17th March 1983 and presently cited as African Charter on Human and Peoples Rights (Ratification and Enforcement Act, Cap A9, Laws of the Federation of Nigeria 2004.

Yours in Service to Humanity,
For: Int’l Society for Civil Liberties & the Rule of Law (Intersociety)