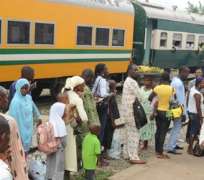 No fewer than 2,500 holiday makers have benefited from the free train ride provided by Osun state government to convey people from Lagos and Ogun states to Osun for the eid-el fitri celebration.

The passengers, according to the Coordinating Director, Osun State Ministry of Commerce, Industry and Empowerment, Mr Abimbola Osho, boarded the train from Ido station in Lagos and Ogun stations respectively to Osogbo.

Governor Rauf Aregbesola’s administration had, since inception, been providing free train ride for Osun indigenes and non indigenes residing in Lagos and Ogun states to come home and celebrate with their families in Osun at every festive period.

Speaking with journalists at the Osogbo terminal upon the arrival of the train at about 9pm on Saturday, Osho said Aregbesola remained committed to making life bearable and easy for his people.

Osho commended the continued free train service in spite of the economy situation of the country, which affect the state.

‎He expressed hope that the gesture would be sustained by Aregbesola’s successor at the expiration of his term, describing the programme as commendable.

Osho said: ‎”Surely, anything good is sustainable. I can tell you that the administration of Ogbeni Rauf Aregbesola has not put anything that cannot be sustained in place.

“We believe very firmly that when the administration of Ogbeni Aregbesola ends, there will be continuity of good programmes of the state government. Every programme of government that is good, the free train service inclusive, will be surely sustained.”