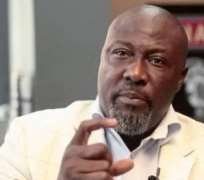 The official recall process for Senator Dino Melaye of Kogi west Senatorial district has garnered momentum with the  Independent National Electoral Commission (INEC) confirming  receipt of the petition by some voters seeking to recall the senator.

“The next step is to verify that the petitioners are registered voters in the Kogi West Senatorial District.

“INEC will, on the 3rd of July, 2017 issue a public notice stating the day(s), time, location and other details for the verification exercise.”

Melaye was quoted as saying in reaction that some people would be going to jail for the exercise. Although it was not clear what he was driving at, it is taken as an imputation that there are fake voters in the list sent to the INEC.