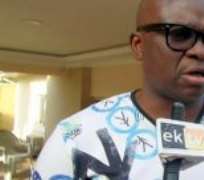 filed by the Economic and Financial Crimes Commission (EFCC) for

from operating his accounts in Zenith Bank Plc, describing the

application as lacking in merit.
The Appeal Court said that; “EFCC did not come with clean hands on the

application for injunction it filed because it suppressed material

facts, for example that a similar application the EFCC filed was

(SAN) that the entire application filed by the EFCC counsel, Rotimi

Governor Fayose, saying the action of the EFCC was against due process

regulations in freezing the governor's accounts.
EFCC had appealed the judgment of the Federal High Court and sought an

injunction, restraining the governor from operating the accounts

pending the determination of the appeal.
Dismissing the appeal today, the Appeal Court, in a unanimous ruling

of December 13, 2016, which ordered the anti-graft agency to unfreeze

EFCC, which it claimed to have received concerning money purportedly

paid into Governor Fayose's account by Senator Musiliu Obanikoro was

not provided nor attached for the court to see.
The appeal court agreed with Governor Fayose's counsel, Chief Mike

Ozekhome (SAN) that “Fayose, being a sitting governor covered with

immunity under Section 308 of the 1999 Constitution as admitted by

EFCC counsel, Rotimi Oyedepo, has been shown to have been tried nor

as proceeds of crime.”
The court described EFCC's claim on the receipt of an intelligent

account by Senator Musiliu Obanikoro as mere speculation, saying; “the

court does not embark on speculation.”
The appeal court also held that since the EFCC had admitted that N80

million had already been withdrawn from the accounts, saying that

completed and an injunction cannot be granted for act already

completed.
Describing the judgment as another victory over tyranny, Chief

Ozekhome hailed the judiciary for standing firm in protecting rule of

law in the country.
He said EFCC must learn to act within the laws of the country and stop