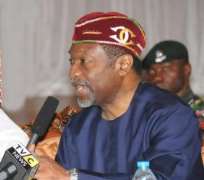 The Federal Government said on Monday it would use a fraction of the looted funds recovered so far to finance part of the 2017 budget.

The Minister of Budget and National Planning, Sen. Udoma Udo Udoma, said this at the 2017 budget breakdown in Abuja.

He said the total revenue projected was N5.08 trillion, with 11 per cent coming from the recoveries made.

“On recoveries, we are being extremely conservative; what is in the budget is what we know about already.

“So if more comes, we will use it.
“Know that recoveries of looted funds are not the most dependable way to finance the budget because of the legal processes that have to be concluded before it can be spent.

“So, the money quoted in the budget is the one we have already recovered and in our pocket to spend as we wish.''

He also said the projected budget deficit which stood at N2.36 trillion remained relatively low at  2.18 per cent of the Gross Domestic Product (GDP).

“This is within the 3 per cent threshold stipulated in the Fiscal Responsibility Act (FRA).

“The budget is to be financed mainly by borrowings which have been projected at N2.32 trillion.

“Of this amount, N1.07 trillion is intended to be sourced externally, while N1.25 trillion will be sourced domestically.''

Udoma stated that N35 billion is expected as revenue from the  outright sale of government property and privatisation of state-owned enterprises.

He said to generate the projected revenue, the Federal Inland Revenue Service (FIRS) and Customs had been challenged to improve their efficiency and broaden their reach to achieve the set targets in the 2017 budget.

He said the Federal Government would strive to maximise the revenues it could generate from the oil and gas sector because the foreign exchange generated from the sector was critical for plans to diversify to the non-oil sectors.

“It is important that we make sure there is peace in the Niger Delta so that we can achieve the maximum from that resource, ” he said.

The N7.44 trillion budget was signed into law by the Acting President, Prof. Yemi Osinbajo, on June 12, a month after it was passed by the National Assembly.

Referred to as the 'budget of recovery', the budget was first presented on Dec. 14, 2016, to the two chambers of the National Assembly by President Muhammadu Buhari at an estimate of N7.30 trillion.