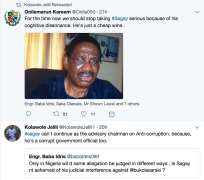 Following revelations in the Panama Papers of the Senate president owning as many as four offshore assets as revealed by the International Consortium of Investigative Journalists (ICIJ) along with PREMIUM TIMES in its publication of April 4th, 2016 , and the recent scandal at the Code of Conduct Tribunal, CCT, the Senate president unleashed his well funded army to go after all his critics.

Top on the hit-list is outspoken conscientious Attorney and Professor, Itse Sagay (SAN), the man behind the exalted Whistle-blower program and head of the Presidential Advisory Committee Against Corruption (PACAC).

Itse Sagay has been noted for standing up for justice even if against his bosses; recently breaking ranks to call for the Buhari, Osinbajo-led federal government to respect of the law and release "illegally detained" former NSA Dasuki and Islamic movement leader Sheikh Zakzaky and his wife. But when Sagay berated the CCT over its handling of the embarrassing Saraki case, he earned the wrath of Saraki who's media attack dogs have since reigned insults on him none stop, religiously, all day long. As Saraki's media aides attacked Sagay in main stream media, the Twitter attack dogs attacked him in the social media.

Yours truly was also just hounded by the pack, who all upped and left my wall when I unveiled and them for what they were.

Profile of Saraki Internet Attack Army
Several of the Twitter soldiers were seen to have created their profiles in June this year or the months before.

Many of the online soldiers launched their Twitter pages with first tweets and retweets promoting the Senate president and engaging his critics with a set of prepared responses. Many registered their twitter accounts right after June 15th, as the CCT acquitted Saraki. Their first tweets were in respect to this.

Saraki's media army are easy to recognize. Most of them have only a couple of followers, 1-20 typically and less than 200 for the super stars. They all follow each other and 100% of their tweets are about the Senate president, creating a nuiscance on the net.

The army appears to be mostly Yoruba as many of their tweets have Yoruba insults in them.

It must be mentioned that there are some coordinators with well weathered years old, robust twitter accounts in the mix of Saraki's hopelessly employed media attack dogs.

Whoever is organizing the well funded media dirt campaign did not even try to hide the nature of the paid agents. It becomes immediately obvious who these unscrupulous elements are the minute you notice them hound you like a pack of flies.

Just when you thought you had seen the lowest point of the 8th National Assembly, you see something new.

Nigeria will be delivered in 2019, God willing. We the Youth must #KillGoliath before Goliath finishes killing us.