In Zimbabwe, Daily News is on the way back 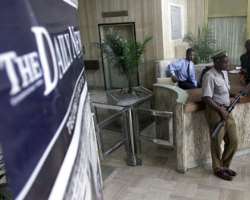 Armed riot police and security officers guard the entrance to The Daily News after it was shut down in 2003. It may soon reopen. (AP)
Listen to article

Zimbabwe's beleaguered independent media won a major victory when an official commission granted publishing licenses to four daily newspapers, including The Daily News, the nation's leading paper before it was outlawed seven years ago. The news was greeted with cheers from independent journalists, who have endured years of repression, arrest, and violence at the hands of Zimbabwe's authoritarian government. Daily News Editor Geoff Nyarota said the decision was good news as he rushed into a meeting to organize the paper's staff. The Daily News was the nation's most popular paper before its printing presses were bombed by suspected government agents and it was then officially banned.

Nyarota, a past winner of CPJ's International Press Freedom Award, returned from exile a few months ago to relaunch the paper after Zimbabwe's iron-fisted ruler, Robert Mugabe, was forced into a coalition government with longtime rival Morgan Tsvangirai.

In addition to The Daily News license, the Zimbabwe Media Commission granted licenses to NewsDay, which is owned by the South African Mail & Guardian group, and a daily version of The Financial Gazette, which has links to Mugabe's ZANU-PF party. A little-known new paper called The Mail also won the right to publish.

The commission, which acted after months of foot-dragging, said Wednesday that The Daily News and the other papers could hit the streets anytime, effectively ending the nation's seven-year ban on independent dailies.

On the streets of Harare, readers welcomed the easing of the media blackout.

“It's good, now we can get the truth every day,” said Tendai Muparanga, riding to work in a packed minibus. “Competition is good.” Tossing aside a copy of the state-run Heraldnewspaper, taxi driver Farai Mutasa said the propaganda organ could never survive a real battle for readership. He predicted the paper, which is packed with fawning stories about Mugabe and his cronies, would soon go the way of the Zimbabwe dollar, which was abolished after the country was wracked by hyperinflation.

“No one will ever buy this again,” Mutasa said. “They will die for sure. We will use it only to pad our seats.”

Press freedom activists cautiously welcomed the move, while warning that the government could reverse it if the papers are deemed too critical. Zimbabwe still has no independent TV or radio stations, and repressive laws limiting free speech and requiring journalists to register with government agents remain on the books.

The decision came more than a year after Mugabe and Tsvangirai's Movement for Democratic Change inked a coalition deal that was supposed to quickly end the government's stranglehold on the media. Instead of simply allowing the independent papers to publish, the government insisted that a commission would have to be established to vet applications.

The Zimbabwe Media Commission was finally appointed several months ago after months of wrangling and horse trading between Mugabe's ZANU-PF party and Tsvangirai's MDC. Instead of moving quickly to license the new papers, the commission raised a series of smokescreens and side issues to justify seemingly endless delays. It initially said it had no funds to operate. When foreign donors offered to fund its operations directly, it refused, claiming that the money would have to be funneled through ZANU-PF-controlled Information Ministry.

State-run papers last weekend quoted ZANU-PF heavyweights who claimed that the funding offer exposed a “foreign hand” behind the independent dailies, without offering any evidence of such a link. The state press also attacked Tsvangirai for trying to get the commission to explain the endless delays, saying such a move would constitute unconstitutional interference in the Media Commission's activities.

That was a laughable claim coming from Mugabe's allies, who regularly summon state media editors to parrot their propaganda claims and demand favorable coverage of ZANU-PF politicians. Mugabe's handpicked election commission presided over his violence-tainted re-election in 2008, which foreign and African observers branded a fraud.

The shenanigans came as no surprise to press freedom advocates in Zimbabwe, who have watched in dismay as the promises of the coalition government fell by the wayside. Repressive laws remain on the books, despite occasional claims from leaders of both political parties that they might be watered down.

Government spokesmen and women regularly denounce so-called pirate radio stations that broadcast from outside the country, even though they have been denied the right to operate in Zimbabwe. Officials still refuse to open the airways to private TV or community radio stations.

Godfrey Majonga, a former anchorman for state-run ZBC television, chairs the Media Commission. It includes several government figures like ZANU-PF mouthpiece Chris Mutsvangwa. Incredibly, its day-to-day administration is run by Tafataona Mahoso, the propaganda chief who oversaw the banning of The Daily News and the implementation of repressive press laws.

The author, reporting from Zimbabwe, is not being identified for security reasons.