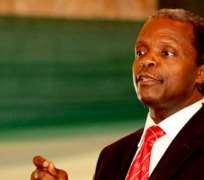 Nzuko Ohanaeze Ndi Ngwa na Ukwa of Abia State has described the meetings the Acting President, Prof. Yemi Osinbajo holds with leaders of some sections of the country over the quit notice issued to Ndigbo residing in the north by a coalition of some northern youth groups as a kid’s glove approach.

The Chairman of the socio= cultural group of Ukwa= Ngwa ethnic nationality of Abia State, St. Moses Ogbonna told newsmen in Aba that the issue requires a more proactive approach and urged the Acting President to immediately order the arrest of the masterminds of the threat.

According to him the arrest of the masterminds of the threat would help the federal government to ascertain their level of preparedness as well deter other groups in the country that would have taken the same line of action.

“It is absolutely wrong for the Acting President to classify a very serious threat that has every potential of endangering the corporate existence of the country as a mere hate speech.

“What the Acting President ought to have done is to order the immediate arrest of the masterminds of the threat to ascertain the real nature of the threat and thereby identify those behind the masterminds. It is when this is done that the issue can be properly addressed and the fears of Ndigbo living in the north would be allayed.

Ogbonna continued:” If Nnamdi Kanu was arrested and incarcerated for allegedly threatening the unity of the country, the quit notice by the coalition of Northern youth groups is no threat to that of Nnamdi Kanu”.

The group blamed the various threats resonating across the nation by different ethnic groups on the ability of the federal government to do the needful.

Reacting to the recent proposal by the House of Representatives to constitute a Joint Task Force of the police and army to monitor the activities of the killer herdsmen, Ogbonna said that the approach may not proffer the required solution to the menace of these herdsmen.

He proffered that local government areas should take census of all the herdsmen within their domain to identify the genuine herdsmen.