Why Ladan Was Sacked As Another shake Up Looms In NNPC 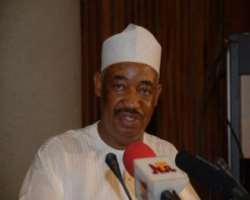 ABUJA, May 27, (THEWILL) - The immediate past Group Managing Director of the Nigerian National Petroleum Corporation (NNPC) Barrister Shehu Ladan was axed from the corporation for what THEWILL learnt emanated from insubordination to the parent Ministry and indeed the Minister of Petroleum Resources, Mrs. Diezani Allison-Madueke.

THEWILL investigation revealed that an instruction was passed from the office of the Minister to the effect that all Group Executive Directors and some staff be removed to pave was for effective transformation of the corporation and the injection of new blood into the system, but all went into the 'deaf' ears of the NNPC Chief Executive who saw nothing wrong for the designers of the transformation policy to still implement same.

THEWILL equally gathered that kicking the top management staffs of the corporation who were put in place by the former Minister of Petroleum, Dr. Rilwanu Lukman, his kinsman from Zaria ethnic nationality, was no doubt a superior insubordination and disrespect for elders in the petroleum industry and felt he could comfortably work with the present executive.

Instead, Ladan publicly dispelled the insinuation of imminent sack of top management staff, as according to him, there was no basis for such speculations as he would neither recommend nor would he accept such instructions from any quarters unless on concrete reasons that borders on corrupt practices and indiscipline.

THEWILL gathered that within the 41 days as NNPC boss, he allegedly refused to approve money from NNPC for some hidden political agenda, apart from establishing mutual rapports with members of the National Assembly.

THEWILL Sources further said that the close relationship between the Minister and Mr. President is such that simple request from the Minister was the only magic to kick Ladan out as no visible reason was given for his removal.

"My brother the sack of the immediate past GMD of NNPC has paved the way for real shake up as she (Minister) vowed last week in a meeting that the reorganization was long overdue," THEWILL learnt on good authority.

THE WILL sought the side of the sacked GMD on the issue but was fruitless as his lines remained not available.

As at the time of going to press, the current Group Managing Director, Eng. Austen Oniwon and the Minister, Allison-Madueke were at the Presidential Villa to seek approval for the impending reorganization of the corporation.

Meanwhile, some investors that visited the NNPC stand at the just concluded Offshore Technology Conference (OTC) in Houston, in the United States have frowned at the current instability in management of the corporation.

The investors in separate phone calls with THEWILL noted that the turn-over of the chief Executives of NNPC in the last three months was capable of eroding investor confidence as the development could trigger policy upturns because of frequent breaks in management.