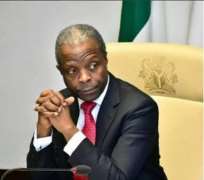 A Presidency official has explained why the budget signing ceremony billed for Friday became a no-show.

The official attributed it to the extensive consultations between the  presidency and ministers, on one hand and  National Assembly members  on the other.

Acting President Professor Yemi Osinbajo was expected to sign the document on Friday and reports had said he had invited both the Senate President, Bukola Saraki and Speaker of the House of Representatives, Yakubu Dogara to the ceremony.

NAN sources said some of the ministers were clamouring for some changes in the budget, as the final figures approved by the National Assembly were much lower than what the President submitted.

Last December,  President Muhammadu Buhari had tabled a N7.298trillion budget to the Assembly, but the lawmakers jacked the final figure to NN7.44 trillion

The budget aims to drag the  country out of a recession that was caused  by low global oil prices that have slashed government revenues, weakened the Naira  and caused chronic dollar shortages.

“There are ongoing consultations between the executive and the legislature over the budget. Consultations have not been concluded,” Senator Ita Enang, senior special assistant to the president on Senate matters told Reuters.

Last year's budget, which was passed in May 2016, similarly faced delays, such that capital expenditure was extended till 4 May2017, well into another budget cycle.