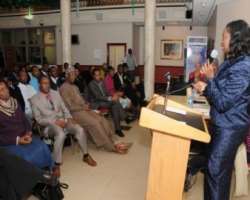 
I have been reflecting on the proper role of Nigerians abroad in the up building of the new Nigeria of our dreams and the more I ponder over it the more I become convinced that this group is yet to stand at her post. It seems to me that the reason for this anomaly can be traced to lack of understanding of what the Nigerian context are viz a viz other countries with large immigrant communities abroad. It is necessary that an explanation of this contextual variation is given to reposition and empower the Nigerian abroad to fulfill her manifest destiny in this regard. â€¨

An American immigrant living in the U.K. may play the role of Ambassador for his country's ideals because America has an ideal built over centuries of continuous effort by succeeding generations attempting in each epoch to retain and reposition this ideal in line with the vision of the founding fathers as preserved in the American constitution. You may see him or her with the American flag or announcing to all "I love NY" and sticking stubbornly to his English language accent. The same scenario would have been different before 1776 independence declaration by Americans from British colonialism. Why this difference, you may ask. Well because the American immigrant before independence had no ideal to really stick out his head for.

The same American could have been engrossed with "God save the Queen" while showing off the British flag before George Washington's so called rebellion brought such a lasting impact. The lesson to learn is that a consistent ideal is important for building a nation and for sustaining and defending it. The ideal were written down in a national constitution, displayed in a flag and coat of arms and scored into music in Anthem, enhances the chances of the citizens becoming familiar with it and defending or upholding it even when they have emigrated to other countries.â€¨ It takes a long time to properly enshrine an ideal in the psyche of a generation or two and any such awareness created may require as many generations to wipe away if ever.

The American constitution has remained infallible for centuries because the makers understood that God is the creator of the Universe and that every form that would be lasting must be as approximate to his laws as possible so they sought his face and guidance and came up with a document that has stood the test of time. People like Thomas Jefferson could not be described as politicians in today's definitions but were called for the work and fulfilled their calling. That is why Americans and their children's children can be saying the same thing about the American dream and understand themselves across board while their up building is consistent and constant, unbroken. As for Nigeria the story is different.

The Nigerian abroad cannot afford to be as patriotic as his American counterpart because there is no consistent Nigerian dream to hold on to or die for. Most of them have knowledge of Nigeria that has changed so much in one lifetime that they have nothing to sing about. Yes the Nigerian dream at independence was so comprehensive but it has changed and may even bring regret to those who dare to reminisce. The excellent national anthem has changed to an one; yet the flag remained to remind us of the old one. The constitution has so changed that the fundamental objectives of state action has become in congruent with what the state has determined to do. Everything is an accusation, a mockery saying "are there really human beings and learned people in this country or having come out of this country?"

And everything is talking to the only group seemingly doomed to be tormented by the knowledge of what it was at independence, the group that has been forced to remain where they went in search of the Golden Fleece in other perhaps to deny us of the fruits of this endeavor because we changed the rules after they had left. Yes we lowered the drawbridge thereby separating them from their ultimate goal of eventually returning to improve their fatherland. Some of our best brains remain in self-exile; the independence generation kids are even leaving us…Yes because the major reason for their incarnation has been changed midstream and there remained no more dreams in place of present nightmares to uphold.

This is a call to duty for the Nigerian abroad because if you fail to understand your unique role as the only remaining reminder and inspiration of a Nigeria that worked, you will be sentencing yourselves to a perpetual self-exile… if Nigeria progresses downwards into disintegration. Pull up yourselves for once and realize that your very future and those of your children is at stake no matter what country you have naturalized in. As long as you were incarnated in Nigeria before your migration, you have a duty to help build this country that gives you a true meaning to life. â€¨

In the same vein realize that you must become only an advocate of the true Nigeria as it was designed by the Creator to be before man's intellectual calculations subverted it.

I see many of my friends planning to come back to contribute their quota to development in Nigeria, and some of them have come back and they have been frustrated by the dark system and some have gone back resigned to their fate. It smacks of misunderstanding of their role because they often became role models to a system that is contrary to their true ideal which they actually more than anyone should embody wherever they live. The way things stand; the Nigerian abroad does not have to come home to contribute to the proper development of Nigeria. You can do it right there in whatever country you live.

The most important point to take in is that your advocacy and pressure should be directed at building the true Nigeria that is agreeable to the tenets of the Independence constitution and vision of Nigeria as enshrined and scored in the old National Anthem and flag. Any other thing you do will be contrary to your own existence and will bring you frustration and lack of fulfillment. Any other endeavor will not bring proper up building like those we emulate and will not give you a reason and strength to return. â€¨ I say these things out of a sense of responsibility for your current activities as a group because I was part of the event in 1992 when this idea was muted to organize more properly Nigerians abroad to become a force for good and appropriate change in Nigeria. I can vividly that very afternoon in 1992 at our Presidential campaign legal office suite at the now Arewa Hotels mile 2, Lagos.

Our legal adviser was set to challenge the decision of the Social Democratic Party {SDP] to impose a N500, 000 levies on Presidential aspirants as a means of forcing them to withdraw from the race. The said levy had a 48-hour deadline, barely enough time to summon a meeting. A foreign Embassy political attaché was visiting and after our discussions over the situation, I remember his reaction: “But... they cannot bring it about”. However this was Nigeria where they could bring anything about. Even before we could come out with a draft of the meeting the announcement had come that we could no longer aspire since 13 of us had paid up.

Later on this 13 were also disqualified. It was then that everybody seemed to be preparing to leave Nigeria. We had one more meeting where we assigned to our colleagues the duty to organize associations of Nigerians abroad and coordinate with us. It didn't quite happen as we envisaged until the communication age. Unfortunately the ideal seems to have been lost because short-term political calculations and manipulation from the system at home seem to overwhelm many of the new associations. â€¨

Instead of becoming the beacon of hope for a new Nigeria these associations struggled to undo each other in sycophantic hustling to please and strengthen the evil system that keeps them perpetually in exile. This attitude must now change. You should first properly set up amongst yourselves as a group and then live the ideal Nigeria, which you embody. No compromise will do here. Reawaken this ideal permanently wherever you stay and show us here at home how to proceed. Just Like you did sometime in New York. You solved the Nigerian problem within hours of your deliberation. And we followed your footsteps, didn't we? Therefore, henceforth do not bother to take cues from us because owing to decades of false groping we are no longer what we should be. â€¨