Why James Rodriguez is a perfect move for Chelsea 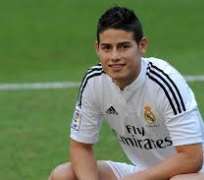 The Colombian star has failed to break into the Real Madrid first team under coach Zinedine Zidane. The 25-year-old playmaker has only made 13 starts in the La Liga this season and is desperate for more first-team football.

While Chelsea manager Antonio Conte is looking for a new attacking midfielder to replace Oscar who departed the club in the last January transfer window.

It's said that Chelsea will have the funds to buy any player and with the sales of Branislav Ivanovic, Oscar and John Obi Mikel, along with the departure of club captain John Terry, it's crucial that Conte reinforces his team for next season.

Furthermore, with the sale of Oscar, the Blues now don't have any attacking midfielders apart from Cesc Fabregas, who could be considered as more of a deep-lying playmaker. And with Champions League football on the horizon, it's crucial that Chelsea sign a world-class attacking midfielder to provide the team with another attacking route.

James Rodriguez has made some valuable contributions to the Los Blancos side when he has played.

Despite his 13 starts and nine appearances off the bench, he's managed to score eight goals and has created six assists (Whoscored) .

He also has an average of two key passes per game which shows his excellent vision to make pin-point passes for his teammates.

The Colombian star would fit perfectly into the Chelsea front three with his ability to play through the middle, the left and the right-hand side. With a front three of Eden Hazard, Costa/ Morata and James Rodriguez, Chelsea would have one of the best attacking trio in the world, up there with Real Madrid's BBC and Barcelona's MSN.

At the moment the only attacking midfielder in the team is Cesc Fabregas. Both Nemanja Matic and N'Golo Kante, while great players, both don't have the attacking skill-set to create a number goals. With the Blues facing world-class teams in next season's Champions League, it's even more crucial to sign an attacking player who can by-pass great defenders and create goals.

Along with his obvious skills, Rodriguez would also likely boost the Blues profile in world football and Chelsea FC would likely make their money back from shirt sales alone. It's been awhile since Chelsea made a statement signing; not since signing Fernando Torres.

It's also crucial to sign another world-class player to play alongside Eden Hazard in order to take pressure off the Belgian. As Premier League clubs have started to man-mark the Chelsea ace with Manchester United's Ander Herrera successfully marking him out of the game in their match.

James Rodriguez would be a great “Galactico” signing for the Blues and would ease pressure off Eden Hazard to create and score goals. If Chelsea want to truly compete next season then it's vital Conte gets a player of his magnitude.