Preventing Malnutrition: What Nigerian Women Are Doing In Agric To Sustain Food 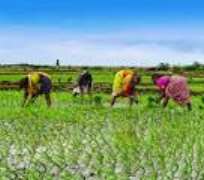 About 70 percent of agricultural workforce in the country is contributed by women yet they have limited farmland. Indications are that upon this, the 70 percent produce cover 80 percent of the nationwide food, Odimegwu Onwumere writes

Despite the outcry by the Standards Organization Of Nigeria (SON), saying that some importers bring in cheap and substandard foods into the country coupled with the N1.6 billion national women’s empowerment fund announced by President Mu­hammadu Buhari in his first bicentenary speech to Nige­rians on May 30 2016, Mrs. Onu Wabara, a mother of 6 children from Asa in Abia State, is not finding it easy to feed her children.

Wabara divulges to this writer that both standard and substandard food items are costly in the market, since the local farmers who are majority women, have less access to arable farmland.

“I’m looking for a word to define the expensive world we are living in today. A basin of garri, a local cassava produce that was sold for N1, 300, goes for N4, 000 to N5, 000 today,” says Wabara, hence she is begging the elders of the town who are mainly men, to expand her farmland for a larger agricultural output.

“As you can see my six children, I’ve cultivated the idea of expanding my farmland in order to produce more food next time especially if the elders will help me out, particularly given the devastations caused on my crops by cows reared by Fulani herdsmen. Take it that both substandard and standard foods are costly in the market. So, individuals have to produce their own crops,” Wabara adds.

In Obuzor-Asa, the devastating habits of Fulani herdsmen that allow their cows to feed on the crops of villagers, who are mainly farmers, are causing untoward wreckage to food production in the community. Many residents in the area are not finding life easy to feed. One of the residents, Mama Obinna, says that she is planning to open a plantain plantation to boost her family’s food security, but there is scarce land as development encroaches.

“If I have my way, I will be venturing into plantain business to help my family have enough food,” Mama Obinna says.

While the likes of Mrs. Onu Wabara and Mama Obinna are looking for ways to augment food security in their families, Mr. Gilbert Osagie, a worker with an oil company in Port Harcourt, the capital of Rivers State, is not thinking agriculture, but has a lot of food to eat. However, the problem he has is the food waste degrading his environment.

“I’m not thinking agriculture; I can afford to buy sufficient food for my family. But my worry is that the waste is causing offensive smell within the environment,” Osagie says.

But pundits at World Food summit of 1996 had rebuffed such stance by Osagie, saying that it does not reflect to the meaning of food security, which is, “When all people, at all times, have physical, social and economic access to sufficient safe and nutritious food that meet their dietary needs and food preferences for an active and healthy life.” Regrettably, the Wabaras and Mama Obinnas are breathing heavily to sustain food in their families.

Reason For Food Shortage
“If food security is a crucial and vital aspect of National sustainability, and development, why is it not a Key Policy direction of the Governments of leading nations of the Globe?

“When you look at the budgets of over 120 governments in the world today the key policy directions range from Defence, Economic Development, Tourism, Science and Research, etc., while Food security and Agriculture is given low-budgetary allocation,” says an analyst who would not want the name in print.

Checks reveal that about 70 percent of agricultural workforce in the country is contributed by women yet they get less of their input. Indications are that the 70 percent produce cover 80 percent of the nationwide food.

“In spite of their (women) huge labour investment, productivity is low and they often have limited roles in decision making on the farms.

“Lack of ownership of land and other productive assets due to existing social norms have created a significant negative impact on the family income and the nation’s GDP at large,’’ says Ousmane Dore, a Director in African Development Bank for Nigeria.

In spite of this, President Buhari said that the money would serve as micro-fi­nance loans to women across the country to assist in revitalizing the economies through agriculture, livestock, inter alia.

A report by Agro Nigeria, a leading voice in agriculture, says, "In Africa, 80% of the agricultural production comes from small farmers, who are mostly rural women.

“Women comprise the largest percentage of the workforce in the agricultural sector – 80% of food producers, 10% of those who process basic foodstuffs.

“They undertake 60 to 90% of the rural marketing; but do not have access or control over land and other productive resources."

Upon this, there are estimations that agriculture adds value to Nigeria’s Gross Domestic Product (GDP) in the ratio of 24 percent. With smallholders like Wabara and Mama Obinna, it gives employment to typically women, no matter the dwindling returns.

Verifications show that the smallholders have access to passable of 1 to 2 hectares for each smallholder and often without entrée to modern equipments, fertilizers, and conservation or storeroom facilities.

This led to Nigeria importing food worth about $11 billion in 2012 even with her wealth of fertile land. In some assessment, between 2000 and 2013, there was food insufficiency and household food price precariousness.

As Minister of Agriculture and Rural Development, Dr. Akinwumi Adesina said in 2013, “Our food imports are growing at an unsustainable rate of 11 percent per annum thereby fuelling domestic inflation and increasing poverty.

Why Food Sustainability, Production, Are Essential

A Director-General of the Food and Agriculture Organization of the United Nations (FAO), José Graziano da Silva, shows apprehension that million people are engulfed in food shortages, many are battling with nutrient deficiencies and a lot of people are suffering from overweight.

“The rapidly growing population; changing and uncertain climate; shrinking farming workforce; poor infrastructure; flat crop yields over the past decades and conflicts in the northern agro-ecological zones (AEZs), where most of the grains are produced – are the main causes of food insecurity in the country,” said Prof. Emmanuel Oladipo as the lead consultant for a United Nations Development Programme (UNDP) – Global Environment Facility (GEF) programme development workshop – while handling the project document development in 2016.

Not leaving the bulk of the matter to women to boost agriculture, some Nigerian men are thinking towards the production of high quality food products. Chief Eric Umeofia, the Chief Executive Officer of Erisco Foods Limited, is one of the men in this line of thought.

“I have said it the umpteenth time and in diverse places that if we must achieve food sustainability, we must look inwards – and production of foods is one of the thoughts,” Chief Umeofia says.

Omeofia believes that if the Minister of Agriculture and his counterpart in Trade and Industry have not shown lackadaisical approach to look into his production idea, his major produce which is tomato – if supported by the authorities – Nigerians will not have any need to look overseas for imported tomatoes.

His comment could be the reason the authorities has initiated new policy for tomato in April 2017, which has been praised in many quarters. Omeofia also believes that some persons in the corridors of power are not doing enough to leverage the country to accomplish measures towards food sustainability.

“The aides in the corridors of power are somewhat economical with the truth, while giving their advise to the presidency and the Central Bank of Nigeria (CBN) on food sustainability,” he says.

The Chief bemoans that in the cause of venturing into production, Nigerians source their foreign exchange up to 96% from the black market and a trifling 4% from the Central Bank of Nigeria. Therefore, he confronts the CBN governor to put out for public criticism, the amount in foreign exchange that indigenous manufacturers get from the CBN.

He befuddles how incredulous it is that the intervention fund that businessmen get in the country is in the area of finished wares from overseas, which is to the disadvantage of indigenous manufacturers.

However, according to Adesina, “We are also importing products that we can easily find local alternatives, which can equally reduce our import bill of almost N635 billion being spent on wheat production.”

Government
Individuals are, nevertheless, not only affected by the thought of food security. The Nigerian Government has openly shown its readiness, saying it will align with the states government and stakeholders in making sure policies that will boost food sustainability in the country are implemented.

The government later launched ‘The Green Alternative: Agriculture Promotion Policy – 2016 – 2020”, a formulation to operate as a roadmap to supplement Agriculture and Food Sufficiency in the country.

Vice President Yemi Osibanjo who’s the keynote presenter at the luncheon, said, “The ever increasing national and world population” can only be fended for if agriculture is presented at the centre of the global priorities for food sustainability.

With five major subjects to the policy, the Minister of Agriculture and Rural Development, Audu Ogbeh said of The Green Alternative Promotion Policy, “First, is achievement of self sufficiency and sustainable food security. Second, is reduction in import dependence and economic losses. Third, is stimulation of agro-exports for enhanced foreign exchange earnings.

“Fourth, is enhancement of wealth and job creation especially the provision of employment opportunities for the teeming population in the country. Fifth, is achievement of economic diversification to make our economy less oil dependent.”

General Thought To Help Women Farmers
Analysts remind the government of how the Malaysian Government came to Nigeria before the oil boom in 1970s and took a seed of palm kernel. Nigeria had agriculture as the foundation of economy.

“The Eastern region was the home of palm nut and cassava, and collectively, the proceeds from these agricultural products made Nigeria the beauty of Africa. Once upon a time, agriculture contributed to over 90% of the country’s GDP.”

Michelle Bachelet, the Under-Secretary-General and Executive Director of United Nations Women and the incumbent President of Chile, says that there can only be sufficient food when women are truly empowered without rhetoric.

“When women are empowered and can claim their rights and access to land, leadership, opportunities and choices, economies grow, food security is enhanced and prospects are improved for current and future generations,” Bachelet says.

Odimegwu Onwumere is an award-winning journalist based in Rivers State, Nigeria. He contributed this piece via: [email protected] {Picture by Agro Nigeria}.