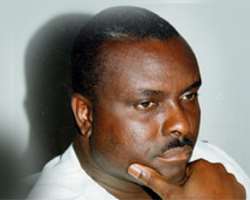 The planned extradition of the embattled former Governor of Delta State, Chief James Ibori, from Dubai, United Arab Emirates, to the United Kingdom may not materialise as he is said to be seeking political asylum in the Arab country.

Our correspondent gathered that the twist was introduced into the matter, on Monday, when Ibori's loyalists arrived in Dubai with documents alleging political persecution against him.

A Presidency source said that the development might provoke a diplomatic row between Nigeria and the UAE, following fears that the Arab country might grant the request.

The source said that the intelligence community on Monday submitted a report to President Goodluck Jonathan detailing the activities of the associates of the ex-governor in Dubai.

The London Metropolitan Police had since 2005 been trailing Ibori over money laundering for which some of his associates and family members are undergoing trial in the UK.

The move by Ibori's loyalists was also said to have put paid to efforts by the Met. police and the Economic and Financial Crimes Commission to try Ibori in Dubai.

According to our source, the influence of 'this network of friends and political associates' is responsible for what he described as 'the non-challant attitude' of the UAE police on the Ibori case.

He said, 'For you to know the extent that they have gone, they have also pleaded to the Vaswani brothers (who are influential in the UAE) to come to the aid of Ibori by ensuring that the asylum is granted.

'The fear of the Presidency is that the UAE might grant the former governor's request for political asylum , because of their economic interest. You know they will not want to do anything that will tamper with their interest.

'I am sure that you are also aware that many Nigerians have chosen Dubai as a place to invest and do business and to acquire landed property. Our fear is that the matter may cause diplomatic problem between us and the UAE.

'The Presidency is watching the matter with keen interest and we will also do everything diplomatically possible to assist the EFCC to have a breakthrough in the planned trial of the former governor.

'The intriguing thing about it is that since the man has been saying he is innocent of the charges, he should have come to the court to prove his innocence.

'Several governors are being tried for corruption and nobody has accused the country of persecuting him.'

When contacted on the new twist in the Ibori saga, the EFCC Head of Media and Publicity, Mr. Femi Babafemi, tersely said, 'I have no information on the issue you have just raised.'

However, he confirmed that the EFCC operatives travelled to Dubai last week.

The Chairman of the EFCC, Mrs. Farida Waziri, had on Tuesday expressed frustration with the alleged attitude of the international community in the country's fight against corruption.

She said that they were complicit in the spate of corruption in the country as some foereign nations assisted the perpetrators to stash ill-gotten wealth in their domain.

Waziri had advocated the death penalty as the right punishment for people found guilty of corrupt practices.

She said this while receiving Senator Smart Adeyemi who paid a solidarity visit to the commission.

The EFCC said that by the time 20 corrupt people were executed others would sit tight.

Waziri said, 'When I had the course to address the international community, I told them that they knew what was happening, but they had turned the other way, because African countries (leaders) were siphoning money to feed their economy.

'They know that some of our people are going to South-Africa, Dubai and UK to buy houses with cash and they know it is wrong because they know in their countries they use the credit system.

'It is not that they love us, it is because we have oil. Look at Burundi, Rwanda, Somalia and Sudan having problems, nobody lifted a finger to help them because they don't have oil. They know that they will go bankrupt if our money is repatriated from their system.

'Whatever action that it will take for Nigeria to flight corruption, let us do it even if it is the death penalty. Believe me, that is the only way to eradic)ate corruption in Nigeria; when you execute 20 people, it will serve as a deterrent to others.'