ELTON JOHN TO PERFORM IN MOROCCO DESPITE PROTEST 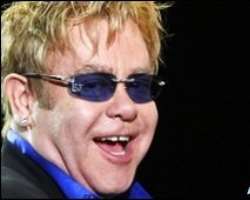 Elton John has said he thinks Jesus is gay
British singer Elton John is to appear at a festival in Morocco on Wednesday despite calls for him to be banned.

But organisers of the Mawazine festival in Rabat defended the decision to invite John, in the interests of “cultural tolerance”.

Last week, a planned concert in Egypt was cancelled after John said in an magazine interview that Jesus was gay.

The artistic director of the Mawazine Festival Aziz Daki told the BBC News website that he expects huge crowds at John's performance.

Continue reading the main story
This man – sorry, I should say this person, not this man – is known for bragging about his homosexuality

Mustapha Ramid
PJD member
“A good crowd is normally around 40,000,” he said.

“Tonight we expect about 60,000 people to come and see Elton John.”

Mr Daki said this was the first time John had performed in Morocco and that the singer was very popular in the country.

“His [John's] career has been very impressive, he makes Moroccans dream and everyone knows his songs,” he says.

Star-studded line-up
But earlier this month, the Islamist Justice and Development Party (PJD) voiced its opposition to John's concert.

PJD member Mustapha Ramid said: “We asked the government to exclude this person from the list of artists invited to this [Mawazine] festival,” reports the Reuters news agency.

“This man – sorry, I should say this person, not this man – is known for bragging about his homosexuality.”

“Morocco is an Islamic state where stages should not be used to allow a person with such a degree of debauchery to perform because we have to shield the young from such influences,” Mr Ramid said.

Islamist groups have in the past criticised such festivals for promoting debauchery and corrupting Islamic values.

These comments led to a planned concert by the singer in Egypt on 18 May to be banned.