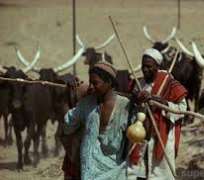 Anxiety and confusion has enveloped Abbi Community in Uzo-Uwani Local Government Area, Enugu State, following the invasion of the area by Fulani herdsmen who unleashed mayhem on the people, killing a brother and sister apart from razing down about seven houses and several motorcycles.

Altogether, 19 persons were declared missing in the community even as several others were also wounded with machetes by the invaders. It was gathered that the Fulani herdsmen numbering over 30 emerged from the bush, and began to attack the people in the community last Thursday, killing their victims and maiming others with machetes before fleeing into the bush unharmed.

The two relations who were killed were identified as Fidelis Okeja, 45, and his sister Mercy, 50. Fidelis and Mercy were sitting outside their compound around 6.30pm discussing when suddenly, about 30 masked Fulani herdsmen emerged from nowhere and them instantly. They later went ahead and attacked other members of the community with machetes, burnt some houses before retreating into the bush.

Investigations by Vanguard, revealed that sporadic shooting by the suspected Fulani herdsmen sent shivers into the inhabitants of other parts of the community who scampered for safety amid confusion. A reliable source in the community said that the people were taken unawares by Fulani herdsmen, adding that the police and members of the local vigilante group were yet to respond to cries of the people before the invaders escaped into the bush. ''The most worrisome aspect of the Fulani invasion of the community was that about 19 people are still missing as nobody can give account of them.

Those missing were last seen on the fateful day. The community formed search parties in groups, combing bushes within and outside the community for days now, yet no sign of success has been recorded,'' he noted.

''We have lodged formal complaint at both Adani police station and Police Area Command Nsukka, but no arrests have been made over the matter. The Fulani herdsmen were armed to the teeth with dangerous weapons when they invaded us. “Two people killed while 19 missing, several others brutalised with deep machete cuts now lying critical down at different hospitals.

“The corpses of the deceased Fidelis and Mercy have been deposited at Bishop Sanahan Hospital, Nsukka while the search for the missing 19 people continues,” he said.

A senior officer at the Police Area Command, Nsukka who spoke on the condition of anonymity confirmed the story describing the attack on Abbi community as pathetic and sorrowful as two biological relations were killed and several others wounded,” among others.