..HOUSE LEADERSHIP SLOT IS PARTY AFFAIRS, I WILL MAKE OUR DECISION KNOWN NEXT WEEK - KINGSLEY ESISO.
By EACOMM EACGOV 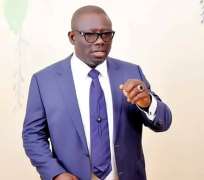 The State Chairman of Peoples Democratic Party (PDP) in Delta State, Olorogun Barrister Kingsley Esiso has confirmed that the impeachment of Rt Hon Monday Igbuya was perfectly in order according to House of Assembly rules and that Rt Hon Sheriff Oborivwori is the new Speaker of Delta State House of Assembly (DTHA).

The disclosure was made on Friday afternoon (19/05/2017) at the party secretariat in Asaba by Esiso while congratulating the newly appointed Executive Assistant on Communication to His Excellency the Governor of Delta State, Dr. Barrister Fred Latimore Oghenesivbe.

Esiso further asserted that the party cannot and will never interfere in the internal affairs of the legislative arm of government relating to issues of impeachment of its Speaker but has absolute powers to decide on who becomes the Leader of the State House of Assembly.

"For the avoidance of doubt, Rt Hon Sheriff Oborivwori is the new Speaker of DTHA to the best of my knowledge as state party chairman of PDP in Delta. There is no controversy at all. Rt Hon Igbuya will return to the House as a member after serving his suspension order.

"The party is in charge of House Leadership slot and I will make the decision of the party known next week. The new speaker is a devoted and reliable financial member of our great party. The House members decided to make him their Speaker and so be it.

"I have no doubts in my mind that Rt Hon Sheriff Oborivwori will do well, if not better, as the head of the Legislative arm of government in Delta State. I see his choice as a square peg in a square hole because he has been a team player, honest gentleman, easily accessible, a great philanthropist, detribalised politician and a highly respected member of our party."

Esiso said those dragging Gov Ifeanyi Arthur Okowa into the affairs of DTHA were frustrated mischief makers either sponsored by the opposition APC or by the moribund Senator Modu Sheriff faction of the PDP, adding that impeachment or change of leadership in Houses of Assembly in Nigeria and elsewhere in democratic societies remains the internal affairs of the legislative arm of governments, not subject to external influence or control.

The astute politician and legal icon congratulated the new EA Communications to Gov Okowa, Barrister Fred Latimore Oghenesivbe, describing him as one of the best political communicators in sub-sahara Africa.

"I must admit that you (Oghenesivbe Fred Latimore) was appointed by His Excellency on merit because of your uncommon skills and superlative use of words laced with political ingredients to drive home your points while projecting your principals via the media. You are a rare breed in media politics.

"I am particularly happy that you are back to our great party, PDP after your media contract with a member of the opposition.

"I must say here and now that the opposition somewhere along the line got carried away and got blinded to your ingenuity and relevance in media politics. The opposition is certainly regretting your exit as can be seen from the wailing and rantings against you. Its expected and we always laugh at their political mediocrity. They will fail woefully in 2019.

"Please remain focused, more committed and devoted to assigned responsibilities so as to take you to the next level. You are one of the brightest resource persons in our great party; use your intellectual and multifaceted creative writing skills to project the SMART AGENDA and our amiable smart governor.

"Your primary and unblemished loyalty is first to His Excellency the Governor of Delta State, then to the state and our great party PDP. Don't listen to political detractors, listen to Gov Okowa, his cabinet members and PDP structures in the state. That's the antidote to your next level."

In his response, the new EA Communications to the Governor, Barrister Fred Latimore Oghenesivbe thanked the state party chairman, Barrister Kingsley Esiso for his wise counsel and again pledged his absolute loyalty to the Governor, the State and PDP structures led Gov Okowa.

"I am humbled Sir, by your kind words, advise and will do the needful to keep the flag flying.

"His Excellency is a kind hearted Pan Deltan leader which he again openly exhibited by an executive pardon on my sins consciously and unconsciously committed during my brief media contract with a member of the opposition.

"For this reason, I remain grateful to God and His Excellency. I will strive very hard to re-write history as Saul the accuser of the Brethren did after he became Apostle Paul, as confirmed and aptly documented in the Holy Bible.

"Mr Chairman Sir, You are one of the firebrand politicians in our great party and I am here today to humbly thank you for endorsing my appointment."

The Organising Secretary of PDP in Delta State, Chief Sunday Onoriode, corroborated the postulations of Esiso by describing Oghenesivbe as the true dogged "Pen Eagle" in media politics. He advised him to double his efforts so as to justify the confidence reposed in him by Gov Okowa and the party structures.

Onoriode commended Oghenesivbe's proactive media reports and articles reeled out before, during and after the arrival in Nigeria of His Excellency James Onanefe Ibori, adding that the entire party structure, Deltans and Urhobo Nation was and still proud of his media roles in welcoming ODIDIGBORIGBO back home in Nigeria after his political victimization in United Kingdom.

Oghenesivbe has since resumed duty as the new Executive Assistant on Communication to Gov. Okowa of Delta State.