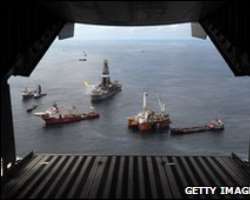 Tony Hayward said that if it was considered safe, the company will begin the procedure on Wednesday.

Teams have been carrying out diagnostic tests to check that the “top kill” method will be feasible and not backfire.

BP is under intense pressure to succeed after previous measures failed.

“Later this morning I will review that with the team, and I will take a final decision as to whether or not we should proceed,” Mr Hayward told the United States' NBC Today show.

“I have to say that it will be a day or two before we can have certainty that it's worked.”

If the new procedure is used, heavy drilling fluids – such as mud – will be injected into the well about a mile (1.5km) underwater.

Engineers hope to follow this with cement, designed to seal the well.

The company has said they estimate a 60-70% chance of success.

Officials say the method has been used before in other areas of the world, but not at the depths required to stem the oil from the Deepwater rig, which sank after an explosion last month.

A conservative estimate of the amount of oil escaping is about 5,000 barrels (210,000 gallons, 795,000 litres) a day while some scientists say it could be many times greater.

The US government has declared a “fishery disaster” in the seafood-producing states of Louisiana, Mississippi and Alabama.

President Barack Obama is due to make his second visit to the Gulf of Mexico region on Friday.

Kent Wells, a vice-president of the company, said on Tuesday that scientists would run the tests “over the next day or so”.

“This has been done successfully all over the world but it has never been done 5,000 feet below the surface of the sea,” he said.

On Tuesday, US Energy Secretary Steven Chu, who has been monitoring the preparations, told Mr Obama in a phone briefing that BP was conducting “crucial diagnostic pressure tests” before proceeding.

In the tests which began on Tuesday, five spots on the well's crippled five-story blowout preventer were being checked to make sure it could withstand the heavy force of the injection.

A weak spot in the device could blow under the pressure, causing a brand new leak.

BP has been drafting plans for the “top kill” for weeks but had to delay it several times as crews scrambled to assemble the equipment at the site 50 miles (80km) off the Louisiana coast.

Rigs, barges and other heavy machinery stood at the ready, according to reports on Tuesday.