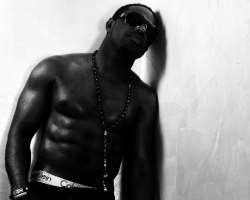 Only God knows why this gaggling actor, Jim Iyke believes in settling scores with violence. The other time at 11:45 nightclub, he reportedly said to have beaten up Olisa over a girl. Another report also has it that, he has habits of beaten up his numerous girlfriends on every slightest provocation, Steph Okeke and others will testify to this testament. Recently, weeks before he had fisticuffs with some guys at Junic Hotel in Asaba, the Globacom Brand Ambassador, Jim Iyke, we gathered was arrested in Benin Airport few hours after abandoning a movie set in Asaba.

A couple of weeks before now, Jim Iyke was said to have being beaten up for same attitude in Kastina State during a film shooting and while he's yet to redeem his dented image on his many controversies, Wednesday 19th may 2010 he left some of his scenes unattended to, headed to the Airport with a reason that he had to conduct an audition for his own film in Abuja. www.nollywoodgists.com scooped.

Mercy Johnson, Van Vicker, Nora Robert are a few of the actors that are posses with this kind of attitude and have once or twice abandoned location and rendered the shooting of that day useless. Other stars in the movie were said to have all registered their disappointments at the silly attitude Jim put up but for the intervention of the director and the executive producer who took off immediately to the nearest Airport in Benin with some Policemen and repatriated him back to the location in Asaba other actors too would have done same.

“It was a very disgraceful scene as people including airport officials gather to rescue him from their grip. Police and other security agents intervened to settle their brouhaha amicably. Finally both parties resolved to sign a memorandum of understanding in presence everybody including the Police and he returned back to the location to finish his unfinished scenes but not without him employing a service of a Policeman to guide him so as not to be beaten but the embittered cast and crew around.” www.nollywoodgists.com exclusively gathered.

At the moment, Jim is said to have hit location for his own movie in Abuja.