Unizik Students Cry To Government As The Ifite Road ConditionWorsened. 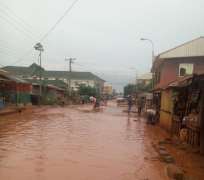 The students of the Nnamdi Azikiwe Have called on the government for rescue as the 24-hour busy Ifite road that leads to the school wears its most hideous outlook as rainy season intensifies in the city.

The road which draws its terminal from the popular Aroma Junction Awka was said to be submerged by flood yesterday as the early morning heavy rain which woke the residents lasted for five solid hours unstopped. As the contumacious rain sustained its tempo, and even aggravated, the naïve students, lecturers, motorists and other road users who had waited endlessly were seen dangling and staggering in the pool of flood. Some Keke (tricycle), motorcycles and school shuttles were submerged and abandoned in the pool of flood as they could not scare through the augmenting huddle, while some students had there well-pressed trousers saturated and even stained when they wanted to take it by force.

Governor Willie Obiano had earlier on 25th June 2016 promised to improve the condition of the deplorable and shabby road and to beautify it with solar street lights, during one of his visits to the school where he joined the management and the students in the 'end-of-month' usual sanitation exercise at the filthy Ifite school gate.. And works had already begun, but the contractor handling the road was said to be as sluggish as millipedes by unnecessarily delaying it till the surprise arrival of the rainy season.

Reacting to the ugly situation, the Speaker of the school's Students Assembly, the legislative arm of the Students Union Government, Hon. Uchechukwu Okwuchukwu decried the sluggish tempo with which the work is being handled, and called on the the said contractor handling the work to speed up his pace in order to avert the students the negative side of the rainy season, which will soon arrive in the fullest.

"They should do us good by speeding up the pace of the work and ensure its completion before the full arrival of the rainy season" Hon. Uche in his word.

Students and the management of the school hereby join voice and call on the government to rush to their rescue and save the road from the impending doom, as the main rainy season is yet to arrive.