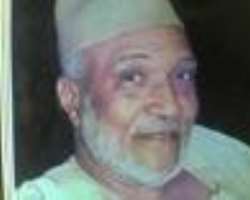 By Nneka Nwanganga , Abuja
A former Inspector-General of Police (IGP), Alhaji Mohammed Dikko Yusuf was yesterday interrogated by the five-man inter-agency panel investigating the Halliburton scam for allegedly playing prominent role in the disbursement of the $190 million alleged bribe money.

His name featured from statements made by witnesses who had been interrogated earlier on the matter.


Alhaji MD Yusuf, a former presidential aspirant, sources at the Force Headquarters said, was asked to appear before the Mr. Mike Okiro-led inter-agency investigation panel and subsequently drilled after which he was allowed to go home and await further action.


The grey-haired former police boss was said to have arrived before the panel sitting at the Louis Edet House, Abuja , which allegedly asked him questions bothering on the money he was said to have received from the alleged controversial $190 million bribe money.


Information also filtered out from the panel that two former Group Managing-Directors of Nigeria National Petroleum Corporation (NNPC), Jackson Gaius-Obaseki and Funso Kupolokun have been asked to appear before the panel.


Apart from the two former NNPC bosses, two other former petroleum ministers, Obot Don Etiebet and Chief Dan Etete, were also said to have been summoned to the panel. But, it could not be ascertained whether or not they turned up for questioning, as at press time.


Sources at the Force Headquarters told our reporter that the former ministers were asked to see the panel on the presumption that they were considered key technocrats who might be relied upon by the same Halliburton to secure the contract for the third phase of the $1.9 billion LNG contract.


It was also gathered that two former military heads of state were equally invited by the panel because it is believed that the duo benefited from the bribe money.


As a result of wide outcry over the complacency of government to investigate the Nigerian counterparts in the Halliburton contract scam, for which several individuals and companies have been punished in the United State , the President Umaru Musa Yar'Adua administration empanelled the Mike Okiro-led body to look into the matter.


Apart from these prominent figures, some aides of some former top leaders were also said to have been named in the scam.


However, following startling revelations said to have been made by witnesses at the panel, the dragnet of witnesses was extended and is likely to be extended to civil servants.

The Okiro Panel which has in its custody, a former Chief of Air Staff A.D Bello, will also invite a former Nigerian Security Organization boss we gathered.


The Federal Government had last month put in place the Okiro panel to investigate the contract scandal.

Attorney-General of the Federation and Justice Minister Mike Aondoakaa, who inaugurated the five-man committee in Abuja, said government would not play politics in prosecuting those found culpable in the scandal.

The committee was given within eight weeks to submit its report to the minister for onward delivery to President Umaru Musa Yar'Adua who would in turn decide on the next line of action.

Before then the Federal Government said $150 million of the bribe money had been traced to an unnamed account in Zurich, Switzerland.

Government also said it had formally requested the United States government to assist Nigeria by de-classifying the information of the court proceedings in the US in respect of the scandal.