DR CAIRO OJUGBO SHOULD BE COMMENDED FOR ENDORSING GOV OKOWA FOR SECOND TENURE.
By EACOMM EACGOV 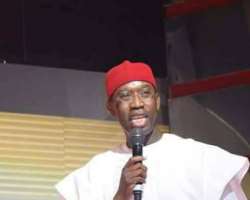 The governor's Executive Aide made the assertion while reacting to Ojugbo's official statement over the internal affairs of members of the Delta State House of Assembly (DTHA) for which the speaker Rt Hon Speaker Monday Igbuya was impeached.

"I think Ojugbo was fair to my boss the governor, for being frank for the very first time since the commencement of his controversial and deceitful media politics.

"Ojugbo and Modu Sheriff must have sat down to do a careful and superb political focast and arrived at the objective conclusion that the SMART governor of Delta State deserves a second tenure which terminates on May 29, 2023.

"Ojugbo will be remembered in the history of Nigerian controversial politics for speaking the minds of the good people of Delta State; for endorsing Governor Okowa for second term even though His Excellency rightly and solidly pitches his political tent and structures with Senator Ahmed Makarfi group of the party till date.

"Opposition political parties particularly the All Progressives Congress (APC), should realise that Cairo Ojugbo's stomarch infrastructure politics is for a while and has nothing to do with the political stability and enduring PDP structures under the leadership of Gov Okowa and State Party Chairman, Barrister Kingsley Esiso in the state.

On the issue of the impeached Speaker, Oghenesivbe said the three arms of government in the state (Executive, Legislative and Judiciary) are independent in line with enduring principles of constitutional democracy, adding that Gov Okowa has no role to play and will never at any given time play any role or roles in the internal affairs of the legislative arm of government.

"Gov Okowa has no misunderstanding with any member of the State House of Assembly. He maintains equal and cordial relationship with members of the legislative arm of government.

"Ojugbo's statement where he alleged that Speaker Monday Igbuya was impeached becauee he accompanied His Excellency Chief James Ibori to Bayelsa state is not only childish, evil and poor political propaganda, its also a mere display of emptiness and frustration.

"Cairo and Sheriff ought to hide their heads in shame because of the shameful and laughable performance of their candidate in the just concluded Warri South Constituency 1 bye-election. Their candidate scored a criminally low 158 votes out of nearly 9,000 votes.

"The result of the Warri South Constituency 1 bye-election not only exposed the political mediocrity of Sheriff and Ojugbo, it further revealed their lack of credibility in political leadership, integrity and mass mobilization failures in Delta politics.

"Ojugbo is being mischievous by linking the state governor to the strict internal affairs of the House of Assembly. The Constitution of the Federal Republic of Nigeria, 1999, as amended is clear on the issues relating to division of powers.

"It follows that the ever busy SMART governor of Delta State cannot and will never interfere with the House Rules and Constitutional duties of the Legislative arm of government.

"Ojugbo must realise that his deceitful and cheap media politics has come to the open. Nigerians are watching Ojugbo and his boss, Senator Modu Sheriff from the roof top to see how they will cover their nakedness in the market square of partisan politics after Supreme Court ruling on the pending appeal," the governor's Aide added.