JONATHAN, KAYODE, WAZIRI, IT IS TIME FOR SHARIA-BASED CORRUPTION/ARMS COURT IN NIGERIA 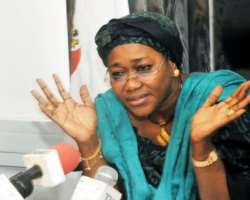 Now that Nigeria is again under the grasp of an active and smooth running executive president compared to the past few months, it is time to think about more ways to protect the national treasury and the peoples' security.

Nigeria with its bi-legal makeup in terms of the composition of the Constitution—civil law and sharia law—make it more charged to protect the nation's security.

In the last few months, the overwhelming nature of the crimes of corruption, along with its twin companion, illegal firearms and other related weapons make it proper to require urgent solutions.

President Jonathan with the executive powers vested in the presidency, should in the short term, order for the set up a jurisdictional body or special court, in the likeness of what could be named as 'Nigeria Corruption/Arms Court'.

All that is needed is issuing executive order due to the urgent situation of these national matters.

The people are already supportive of urgent ways to protect the nation, given their loud but helpless cries over these malicious crimes against their day to day security.

As such, they will understand that the usual snail-like or slow approach to the passage of laws under the National Assembly or legislature makes the reduction of corruption and gun crimes equally slow. A reality that the Senate President, David Mark and the Speaker of the House of Representative, Dimeji Bankole cannot deny.

President Jonathan should order that cases of corruption and firearms come under a special court system. Since the Nigerian Constitution has Sharia Criminal Courts as part of the national legal system, no law is broken as it relates to the equal protection clause. Therefore, it is definitely fair for the use of these courts in any matter, and on any person irrespective of his or her tribal, religious or regional background.

Why the Nigeria Corruption/Arms Court, and why being placed under the Sharia jurisdictional umbrella? Here is why.

1. Because these courts are less crowded, 2. They are very effective in terms of just and speedy resolutions, 3. They are retributive in terms of penalties. 4. The tactics of justice are scary but markedly just and heavily deterring. 5. The harsh outcomes that come at the end of any successful prosecution and conviction are quickly recognized in public. 5. These courts could open potential offenders to psychological ramifications as in acute apprehension and dreadful thoughts of facing light and tough impositions common in various judgments—public flogging, body branding, nose cutting, cutting of hands, eye gouging, leg amputation, and death sentence by stoning, beheading, and hanging. 6. The judges are in general holy warriors of injustice and are less susceptible to enticement, therefore they could be harsh towards public immoralities like crimes of corruption and firearms. 7. Along some of the reported retributive penalties, should be various forms of restitutions, and the recovered monies from the culprit should be used to fix broken windows/chairs of primary schools and to provide water/electric related power to hospitals located in the culprit's native town.

8 .As starting points, Nigeria Corruption/Arms Courts could be in places like Zamfara, Yobe, Katsina, Sokoto, Jigawa, Kebbi, Kano, Abuja, and may be, in other areas like Warri, Benin City, Lagos, Oyo, Port Harcourt as well as other places of interest to the President.

President Jonathan in his authority has the power to exercise check on the National Assembly or legislature through executive power, especially on matters that call for urgent public protection.

The setting up of special court(s) to safeguard the national treasury and the peoples' safety, is the only apparent way to protect the nation from a number of heartless, unpitying, calamitous, wicked, 'I don't care', crime bangers.

'O' Boy, My Dear Sister, what else could save the people from that bad 'Big Man or Madam'? This is where the President becomes very important and essential to the people.

The President should directly, openly and publicly put forth these painful but unavoidable proposals, and with the aid of his candid Attorney-General, Adetokunbo Kayode, and his able chief prosecutor, Farida Waziri, these recommended arrangements as in the indicated special courts could be the only, immediate, and best hope for the nation.