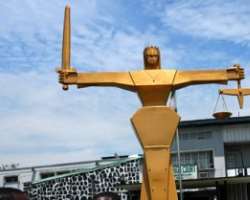 An Ikeja High Court was on Thursday thrown into confusion after a witness slumped and died in the court just before testifying in a land case.

The News Agency of Nigeria (NAN) reports that the deceased, who was in his late 30s had come court to testify in a land dispute before Justice O.A. Olayinka.

“Before the case was called for trial, he started coughing and gasping and had to leave the courtroom.

“He was vomiting a lot of blood and onlookers were scared to go near him. He collapsed on the corridors of the courtroom and a medical team came in an ambulance to take body away.

“His lawyer informed Justice Olayinka of his client's death and she immediately stopped proceedings for the day,” a witness said.

When NAN visited the courtroom, clots of blood were seen on the corridors of the courtroom as well as the blood-stained shirt and leather slippers of the deceased.

A court registrar, who pleaded anonymity, told NAN:“I am not authorised to speak on what happened in this court today, it is only the Chief Registrar that can speak.”

Contacted, the Chief Registrar was unavailable as he was having a meeting with the Chief Judge and Chief Security Officer of the court. (NAN)