NANS agrees to partner FG on “Change Begins With Me” 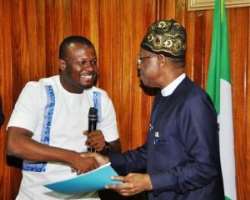 The Federal Government will partner with the National Association of  Nigerian Students (NANS) to take the “Change Begins With Me” Campaign  to universities across the country, the Minister of Information and  Culture, Alhaji Lai Mohammed, has said.

Speaking during a courtesy visit to his office in Abuja on Tuesday by  the leadership of NANS, the Minister said Nigerian students remain the critical mass of the public who can drive the national re-orientation campaign to success.

“I think the biggest news you have given me today is your readiness to  work with us on the ‘Change Begins With Me’. I see ‘Change Begins With  Me’ as the greatest legacy this government can leave and it is not by  accident that our campaign is largely centered around students. We  have about seven themes that concentrate only on students. I remember  very well about the one that says that ‘I will not sell my body for  marks’, which reflects the campaign on moral rebirth,” he said.

Alhaji Mohammed said “Change Begins With Me” is about attitudinal  change, adding: ”We must change our ways of doing things starting  from punctuality, honesty, integrity, and industry. We have to change  the way we do things in such a manner that will benefit everybody. We  cannot be doing the same thing over and over again and expect a  different result.”

While acknowledging NANS’ commendation of the Federal Government for  the rescue of 82 Chibok school girls, he said even though there are  ongoing efforts to secure the release of the remaining girls, the  government is now working for the total restoration of peace and  security to the North East and other parts of the country.

The Minister said in the area of economy, which was crippled by the  crash in crude oil prices and unbridled corruption, the Federal Government has remained focused in fighting corruption and  diversifying the economy away from oil in order to insulate the  country from the volatility of crude oil prices.

He gave the assurance that because of the creative approach adopted by  the Buhari Administration to restore the economy, Nigeria will soon  march out of recession.

Earlier, the National President of NANS, Comrade Aruna Kadiri, hailed  the government for the rescue of the 82 Chibok girls.

“Let me appreciate this government for the victory recently achieved  talking about the 82 Chibok girls, it’s a laudable achievement. We  want to use this opportunity to congratulate the Federal Government  and the Nigerian Military, the DSS, the Police, everybody that has put  in effort to make sure that we bring back our girls. We are saying  this because Chibok girls are students and they are under our  offices,” he said.

Comrade Kadiri said NANS has resolved to partner with the Federal  Government in the national re-orientation campaign, tagged “Change  Begins With Me”, noting that students and ordinary Nigerians should be the ones driving the campaign.

He also commended the Minister for working hard to bridge the  communication gap between the government and the people.