INEC will make future polls better than that of 2015: Mahmood Yakubu 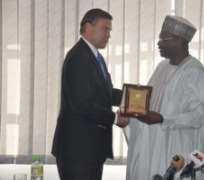 Chairman of Independent National Electoral Commission (INEC), Prof. Mahmood Yakubu, said the commission is committed to making future elections in the country better than the 2015 exercise.

Yakubu made the pledge when he received the new United States Ambassador to Nigeria, Mr Stuart Symington at INEC headquarters on Wednesday in Abuja.

He expressed gratitude to the U.S. Government for its commendation of the 2015 polls.

According to him, you have noted that the elections were well organised and were of international standard and accepted, contrary to situation in the past where there were protests on the street after elections.

“After the 2015 elections, there were jubilations on the streets and this further underscored the achievement of the commission and the steps that Nigeria has taken towards consolidating its democracy.

“We appreciate your kind words; 2015 was a defining moment for Nigeria elections, but we want to assure you that the commission is conscious of its responsibility and we are committed to making future elections even better.

He said that one of the steps being taken was proper planning.

“We have been planning ahead for 2019 general elections and beyond, and we have done so in many other areas in two ways.''

He disclosed that the commission would, from next week, commence the process of implementing its “2017-2021 Strategic Plan''.

The chairman said that the commission would also clean up voter register, conclude ongoing continuous voter registration in 774 local governments before the 2019 general elections, and continue the exercise later.

He also listed the fixing of specific dates ahead of the 2019 general elections as well as deepening the use of technology as other steps being taken to improve on the country's electoral system.

Yakubu pledged that the commission would continue to work more closely with the US embassy to strengthen the country's democracy and electoral process.

“Many people don't also realize that the Nigeria presidential democracy is second only to the US in terms of the size of registered voters.

Earlier, Symington had said that his visit to INEC was to learn how Nigeria conducted its elections, and commended the commission for the success of 2015 general elections.

He said that conducting widely accepted elections had helped Nigeria to play a leading role expected of it in Africa.

Symington said that majority views across the globe on the 2015 general elections was that the elections were conducted in the atmosphere of peace imposed by wind of hope and shaped by the certainty of comfort.

“So, the combination of peace, hope and comfort seems to me a sort of key that is needed, going forward,'' he said.

He, however, listed good relationship and confidence between the leaders and the followers as some of the key factors required for good governance across the globe.NAN