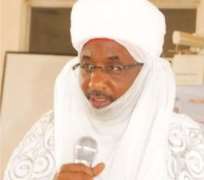 Junior Kabara was arraigned before a Senior Magistrate Court sitting at No Man’s Land Kano, on Wednesday, for three-count charge of inciting disturbance, defamation of character/insult and attempt to breach peace.

The offences contradicted sections 114, 392 and 399 of the Penal Code, according to the police First Information Report.

The accused, the FIR said, defamed the personality of the emir while addressing his followers at Goron Dutse quarters on the 28 of April, 2017.

However, when the charge sheet was read to the accused, he denied all the three charges leveled against him.

In view of this, the Prosecution Counsel, Inspector Haziel Ledapwa applied for a new date on the grounds that police had not completed investigation.

Counsel to the accused, Barrister Hassan Dikko, who did not object the application, applied for his client’s bail.

The presiding judge, Senior Magistrate, Hassan Ahmad granted the accused person bail in the sum of N1m with two reliable sureties in like sum. One of the sureties must be a director at the federal and the other at state level Ahmad also adjourned the case till June 6, 2017 for continuation.

It would be recalled that an audio clip containing words of insult against the emir by a man suspected to be Sheikh Bazallah, went viral on the platform of social media recently. The man in the clip was responding to the emir’s recent statements about the late Kabara’s family crisis.