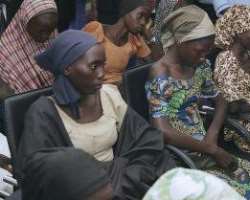 Nigeria has secured the release of 82 more Chibok girls kidnapped by Boko Haram militants more than three years ago.

A statement by the presidential spokesman, Mallam Garba Shehu on Saturday confirmed the release of the girls.

The statement stated: “The President is pleased announce that negotiations to release more of the Chibok Girls have born fruit with the release of 82 more Girls today.

“After months of patient negotiations, our security agencies have taken back these abducted girls in exchange for some Boko Haram suspects held by the authorities.

“The Girls are due tomorrow in Abuja to be received by the President.

“The President expressed his deep gratitude to security agencies, the military, the government of Switzerland, the Red Cross, local and international NGOs for the success of this operation.

“It may be recalled that when the first batch of 21 Girls were released in October last year, the President directed the security agencies to continue in earnest until all the Chibok Girls have been released and reunited with their families.

“The President has been receiving full reports from the Director-General of the State Security Services at each stage.”

Segun Adeyemi , the Media aide to minister of Information and Culture, Alhaji Lai Mohammed, earlier on Saturday evening confirmed on his Facebook page that 82 of the remaining 195 girls in Boko Haram’s captivity have been freed.

On the night of 14–15 April 2014, 276 female students were kidnapped from the Government Secondary School in the town of Chibok in Borno State, Nigeria. Responsibility for the kidnappings was claimed by Boko Haram, a terrorist organization based in north-eastern Nigeria. 57 of the schoolgirls managed to escape over the next few months

This brings to 103 the girls already freed by the Boko Haram militants.

The first batch of 21 were freed last October with the aid of the Red Cross and a Switzerland. Three other girls walked into freedom on their own, making grand total of 106 girls freed from the clutches of Boko Haram.

‘They are now at Banki, a border town and will be flown to Maiduguri on Sunday”, a government source told NAN Saturday night.

“The story is authentic’, added the source.

“It would be recalled that in October last year when the 21 were released, the Federal Government, specifically the Presidency said that 83 more were ‘on their way’.

“We await official confirmation from the Federal Government and a release of their names. We shall go to work to confirm the news to verify its authenticity, and communicate same to the public.

“Our hopes and expectations are high as we look forward to this news being true and confirmed”.

A military and a civilian militia source in Banki, near the border with Cameroon, said “at least 80” girls were brought to the town late afternoon on Saturday.

“The girls are now lodged in the military barracks and will be flown to (the Borno state capital) Maiduguri tomorrow (Sunday),” said the military source.

Enoch Mark, a Christian pastor whose two daughters were among those kidnapped, said he was told of the release by the Bring Back Our Girls pressure group and an official in Maiduguri.

He added: “This is good news to us. We have been waiting for this day. We hope the remaining girls will soon be released.”

Over 270 girls were kidnapped at Chibok Girls Secondary School on 14 April 2014, to the shock of many Nigerians and the international community.

Fifty seven of the girls escaped, while 219 were taken away, with the government of Goodluck Jonathan tardy in mounting a rescue operation.

The Buhari administration since it came into office on 29 May 2015, has been working towards freeing all the girls still in captivity.

At the third anniversary of the abduction of the girls, President Buhari further made the commitment in a special statement:

“Like I have repeatedly said, the Federal Government is willing to bend over backwards to secure the release of the remaining Chibok girls. We have reached out to their captors, through local and international intermediaries, and we are ever ready to do everything within our means to ensure the safe release of all the girls.

“I wish to reassure the parents of the Chibok girls, all well-meaning Nigerians, organisations and the international community that as a government, we are unrelenting on the issue of the safe return of our children.

“I trust God that soon, our collective efforts will be rewarded with the safe return of our schoolgirls to their families, friends and their communities”. – Agency report.