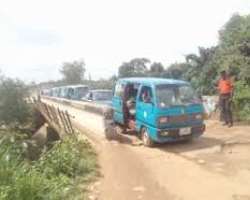 The Deputy Speaker, House of Representatives, Hon. Lasun Yussuff, has debunked the claims by officials of Osun State Government that the reconstruction of the Ojutu Bridge, the bridge between Osogbo metropolis and Ilobu, an adjourning town in Osun was facilitated by the Osun State government.

Dr Ajala explained that Hon Yussuff, who is representing Irepodun/Orolu/Olorunda/Osogbo Federal Constituency of Osun State facilitated the project as one of the capital projects attached to his office as the Deputy Speaker in the 2016 Budget with personal efforts to its speedy execution.

"The subject of our conference is to debunk the lies told by some mischievous and malicious officials of Osun State Government on the designing and construction of new Ojutu Bridge along Erinle River on Osogbo/Ilobu/Ifon /Ogbomoso road in Osun State.

“We were struck by a media report, which was reported on Osun State Radio and Television Stations on 3rd of May 2017, credited to one Mr. Kolapo Alimi, a former commissioner and recently a cabinet member nominee in the Government of Osun State, Engineer Nurudeen Adeagbo, Permanent Secretary, Osun State Ministry of Works and one Hon. Kamil Oyedele, a member of State House of Assembly representing Irepodun/Orolu State Constituency, that the award of the “Ojutu bridge was facilitated by the Governor, Mr Rauf Aregbesola and not by a Federal Lawmaker as widely known.

"As soon as Lasun became the Deputy Speaker of the House of Representatives, on the 30th November 2015, he wrote a letter (Ref: NASS/HR/DS/BNA/M5C/470), to the Hon. Minister of Works, Power and Housing, where he called the attention of the Hon. Minister to the deplorable condition of the said bridge and the need to design and construct a new bridge that could replace the existing narrow one that was about 102 years old.

“In the reply, the Hon. Minister assured Rt. Hon Lasun Yussuff of his esteemed support and regards. He also suggested that both of them would have to do the processing. On the part of Lasun Yussuff, the Hon. Minister suggested that he would send his ministry officials to inspect the bridge and that the Deputy Speaker should mark the bridge as one of the projects earmarked for his office as his allocation of capital projects in his federal constituency.”

"It was also on record that Rt. Hon. Lasun Yussuff invited the Permanent Secretary in the Ministry of Works, Power and Housing to Ilobu Day 2015. It was during that occasion that the Permanent Secretary (PS) passed on the bridge. The sight seen was ridiculous as the PS could not pass with his vehicle. He took the picture of the scene and presented his experience to the Hon. Minister of Works on his return to Abuja.

"The design and construction of Ojutu Bridge was included in the 2016 budget draft by Rt. Hon. Lasun Yussuff as one of the capital projects allocated to his office as Deputy Speaker. Other capital projects included in the budget were: Asphalting of Osogbo/Ilobu/Ifon/Ilajue/Oyo state border road; Construction of 150 bed-space comprehensive hospital in Osogbo and the Construction of another 150 bed-space comprehensive hospital in Ilobu among others," he said.

Ajala added that all the enunciated projects were captured in the 2016 budget, noting that following the spurious allegation of budget padding that was orchestrated by Hon. Jubrin Mumin, the passage of that budget was stalled, and Rt. Hon. Lasun Yussuff was made as the Chairman of the committee that resolved the budget impasse caused by Hon. Jubrin, according to him, that singular opportunity enabled Lasun Yussuff to clear the dust on all the projects he had earlier facilitated in the 2016 budget.

"The harmonized budget, which contained all the capital projects allocated to Lasun Yussuff as Deputy Speaker was approved and signed to law by His Excellency, President Mohammed Buhari. Thus, all the projects got force of law and remained to be executed.”

The Deputy Speaker also accused the state governor of not listing the Ojutu Bridge as one of the projects currently embarked on by the federal government in the state when the Minister for Works, Power and Housing, Babatunde Fashola visited in March, 2017.

He said "The contract was awarded to Messrs Preconsmith Construction Ltd, who might have been mobilized. The site Engineer of the Company reported at the constituency Relation Office of Rt. Hon. Lasun Yussuff in Osogbo on 28th April 2017. The Constituency Relation Office is presently in charge of allocation of construction site, accommodation and boarding for all the technicians and engineers that would be involved in the project.

Dr. Ajala however called on the representatives of the Osun State Government to refrain from alluding to the government and the governor, what was not done.

"The Deputy Speaker of the House of Representatives is not interested in politicizing this development but we enjoin some mischievous and malicious elements associated with the government of Osun State to desist from parading indecent lies in an attempt to glorify their dwindling images aitical personalities”, he stressed.