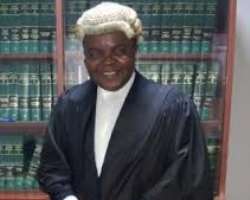 The adjournment followed a motion filed by the defendant, Mr. Ugwuonye, challenging the twenty thousand Naira (20,000.00) fine earlier slammed on him by the Court for refusing to move an earlier motion he filed challenging the jurisdiction of the Court to hear the matter.

He also prayed the Court to reinstate the motion, which was earlier struck out, saying his absence in previous Court sittings was not deliberate.

Counsel to the Plaintiff, Tony Ogbulafor told the Court that the fresh motion was served on him same morning in the Court hall, but still expressed readiness to address all the issues raised in Ugwuonye&rsquo;s motion orally, from points of law.

When called upon to formally move the motion in Court, Ugwuonye asked for an adjournment, to enable him prepare to move his motion, a development that surprised both the plaintiff&rsquo;s team and observers.

Ogbulafor had earlier told the court that the defendant, Ugwuonye&rsquo;s conducts were unethical and an abuse of court process, even as he accused him of wasting the time of the court, with a view to delaying the road to justice.

After a heated debate, the presiding Judge, Justice Peter Kekemeke adjourned the matter to May 18, 2017, amidst protest by Ugwuonye, who argued that the date of next adjournment was too near.

It would be recalled that for falsely accusing him of having a hand in the sudden disappearance of his estranged wife, Charity Aiyedogbon, David Aiyedogbon, the ex-husband of the missing woman instituted a defamation of character suit of Ten Billion Naira (N10b) against Lagos Lawyer, Emeka Ephraim Ugwuonye.

The Suit, with number CV/2750/16, between David Aiyedogbon (Plaintiff) and Emeka Ugwuonye (Defendant) on defamation of character, before Justice Peter Kekemeke of Federal Capital Territory (FCT) High Court 14, Apo Abuja; also prays that the defendant be ordered to pay for the cost of the suit.

The Plaintiff is also seeking an order of perpetual injunction &ldquo;restraining the Defendant, his Agents, Privies, Associates or whosoever called&rdquo; from making further defamatory publications against him and his family members.

At the resumed hearing of the matter, the Court earlier granted a request brought before it by way of Motion Ex-parte, for service outside its jurisdiction by the lead prosecution Counsel, Tony Ogbulafor.

Mr. Ugwuonye is accused of posting severally on the Due Process Advocates (DPA), a Facebook group, claiming to have evidence of the involvement of the missing Charity Aiyedogbon&rsquo;s ex-husband, David Aiyedogbon in her sudden disappearance.

In another post, Ugwuonye is quoted as posting: &ldquo;this is the headless and dismembered body of Charity Aiyedogbon (posting a corpse on his DPA Facebook page). DPA has been able to identify this as her body within the limits of resources at our disposal.&rdquo;

Continuing, on the 28th of June, 2016, he is quoted as posting: &ldquo;To reciprocate the gesture, I will describe David as a low-life and cold-blooded murderer of his own wife. The only reason I would not go further to describe David in the most despicable language that he rightly deserves is that I would rather focus my argument on points that would lead to justice for Chacha.&rdquo;

In an earlier reaction to Ugwuonye&rsquo;s allegation, Mr. Aiyedogbon washed his hands over the disappearance of the woman and wrote his accuser, through his lawyers, demanding an apology, failure which he would institute a suit against him for defamation of character.

The letter titled: &ldquo;Defamation of the character of David Aiyedogbon; demand for apology,&rdquo; signed by his lawyer, Obiora Ilo and made available to newsmen, expressly states: &ldquo;It is our instruction to demand an unqualified apology from you to our client through our chambers for the defamatory publications you have made of and concerning our client.&rdquo;

Investigations reveal that Mr. Ugwuonye is yet to produce any evidence to substantiate his claims. He has also not responded to the Writ of Summons served on him on the 16th of November, 2016 on the matter.